Someone is smoking in the lavatory
and one of the flight attendants says
shit and she gets on the mic and says
whoever this is will be prosecuted
to the fullest extent of the law
upon landing while I’m writing
I hate ballpoint pens
with a ballpoint pen because
they don’t spray my period-brown
ink all over the white designer jeans
of the gorgeous Miami woman
to my right—which was how I learned
not to write poems in a metal box
in the sky with a 1930s Sheaffer
fountain pen—and I was the one
waiting at the lavatory door
when we all smelled the smoke
and didn’t know what to do and I’d
already been between two bombs
at a bombing, so after being ordered
back to my seat with a full bladder
of wine, I order a whiskey, and this
turns the Romanian flight attendant on,
who winks and gives me nuts and olives
on the house, and by now I know
again we aren’t about to explode
this time, and swallow my nip
and eat my snacks and continue,
with this ballpoint pen I hate,
working on what will, nineteen days
short of two years from now, become
a poem, and we land in Bucharest
and everyone but me claps in perfect
post-communist unison and
the smoking man gets away with it. 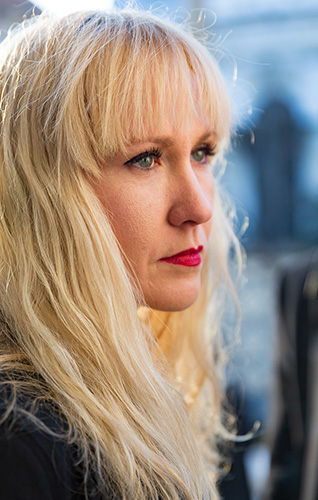 Tara Skurtu is the author of the chapbook Skurtu, Romania and the full poetry collection The Amoeba Game. She is a two-time U.S. Fulbright grantee and recipient of two Academy of American Poets prizes and a Robert Pinsky Global Fellowship in Poetry. She teaches creative writing in Bucharest. (updated 10/2018)