Chopin.  Psychology.
The wasp stings of childhood,
chunks of raw potato held against the swelling.
A dress I once wore, navy blue
with polka dots.  Church suppers,
smelling of ham. The words organza,
gabardine, seersucker,
a pharmacy with shelves
of apothecary bottles,
and the potions, brown and thick,
that saved no one.

Tuna fish sandwiches wrapped
in wax paper that my mother packed
in a hamper and carried to the beach,
she who so often forgot
to think of herself. So does the thought
of a beach, the way it stretches and stretches
like an elastic ribbon until it circles the globe
and there is no getting to the end of it
since it’s not a ribbon at all
but the world itself
and there is no getting to the end of that,
or to all that comes and goes, people
and things that arrive
and then vanish
with a brevity that might, on another day,
from another heart, more valiant,
less fickle,
appear as radiance,
and the grief, praise. 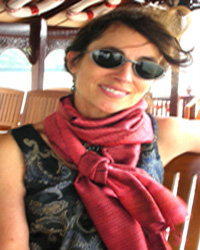 Juanita Brunk’s poetry collection, Brief Landing On The Earth’s Surface, was chosen by Philip Levine for a Brittingham Prize and published by University of Wisconsin Press. She lives and writes in Brooklyn, New York. (updated 5/2011)