I was thinking of us spread arm over leg, spread-eagled
if you will, as we watched the sky turn green over a Carbondale

We were one foot in the yellow, the other in the blue,
as the Doppler radar tracked the squall’s latest moves

from the Storm Center in Norman, Oklahoma, its cut
and thrust reminding us of that thirty-five foot

twister of muslin and chicken wire that, in Kansas, in 1939,
would touch down soon on the Gale family farm,

where Uncle Henry and those three shiftless farmhands,
soon to become the Scarecrow, Lion, and Tin Man,

try to stop the horses from bolting before bolting up
the barn. As it is when Dorothy—played for a few shots

by Bobbie Koshay and not Judy Garland—throws open the door
on Munchkin Land, we’d stepped from sepia to Technicolor

by way of tea-smoked duck, a little too much plum wine.
It was all painted backdrop, all artificial flower and vine

when you yelled out “right leg” and I answered “green.”
We both waited for the other to topple onto an elbow or a knee

as the updraft passed through Jonesboro and Pinckneyville,
gathering to its core a rowboat, a rocking chair, a woman on a bicycle. 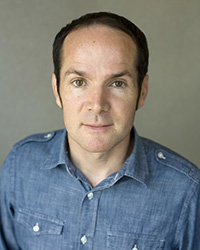 Ciaran Berry is the author of the poetry collections The Dead Zoo (Gallery Books, 2014) and The Sphere of Birds (Southern Illinois University Press, 2008), which won the Crab Orchard Award. His work has appeared in Crazyhorse, The Threepenny Review, AGNI, Ecotone, Poetry, Poetry Ireland Review, The Southern Review, and elsewhere. (updated 6/2017)