The tank bubbles intermittently,
but there is no tide to sway her into grace.
Turn, and in your peripherals there’s

_               _a sudden flex, a time-lapse lily blossoming
into your blind spot. Trebled, as if by volition,
now spread against almost the entirety
of the glass, she obscures her habitat and commands

But no—she can never know fully the spectacle
_               _of her fullest extension, her underside
a mystery only glimpsed in walleyed glance,
rather than the awesome totality now 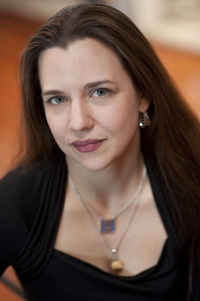 Nicky Beer is the author of The Diminishing House (Carnegie Mellon, 2010) and The Octopus Game (Carnegie Mellon, 2015). She has won a literature fellowship from the National Endowment for the Arts, a Ruth Lilly Fellowship from the Poetry Foundation, a scholarship from the Bread Loaf Writers’ Conference, and a “Discovery”/The Nation award. She teaches at the University of Colorado Denver, where she co-edits Copper Nickel. She is married to the poet Brian Barker. (updated 9/2015)