The loons that are the nymphs of Kezar Lake
yodel in September’s sudden dusk
or at a few undulating stars
as Jim snaps the boat’s canvas cover
shut, though it doesn’t look like rain.
Light wobbles when he scans the water
as if he’d dropped his keys, safe
in a pocket, cased in plastic that will float.
His boy reenlisted after two tours in Iraq.
His wife’s as thin as one of the birches
rooting in sand, close—too close—
to shore. Loons flock before they fly
to open water, not milder weather.
It’s still warm, a few kids hanging out
on the beach, smoking something.
We used to know every child, who belonged
to who, the Smiths with neon folding chairs,
Beth and Amy Brown’s bamboo rods
bobbing as they rowed out for the evening rise.
I think the loons are their childhoods,
my daughter’s too, and Jim’s sergeant
of a son, hooting in the desolate way of strays
let go after months of human companionship
on gravel roads that loop around the lake.
Some open cottage doors to take them in—
little lares thumped down at the hearth,
cats licking a paw, dogs empty of malice
or blame. Others shoo the supplicant away.
Carved idols of nymphs, grottoes polluted
by toxic runoff, brood from their mantels—
white band around the neck, red stone for an eye. 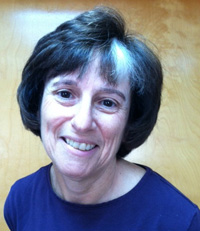 Joyce Peseroff’s fifth book of poems, Know Thyself (Carnegie Mellon University Press, 2015), was named a “must-read” by the Massachusetts Center for the Book. She was distinguished lecturer at University of Massachusetts, Boston, where she also directed the MFA program in its first four years. She blogs on writing and literature at joycepeseroff.com. (updated 4/2018)