My lord, wake up. There’s snow. It fell all night.
Snow on the inns and taverns, hovels, lanes;
on courtyards, alehouses, guild-halls, gates.
Look at the baker’s son, dropping his loaves
on ice; the harlots huddled on Hog Lane.
Moorgate and Cripplegate covered in snow,
the palace lost inside the commonness
of snow, all London hushed like under lambskin:
snow on posts and pillories and stocks.
On the unburied dead. On ancient graves.

Wake up, my lord. Here’s cheese, here’s ale,
and your long pants, and your boots, unpolished,
as you like. Look how the sky seems lighter,
like a ship back from the land of spice,
unburdened of its load, the whole world packed
in salt, the beef-stalls and the breweries,
the herring smells and onion smells, the smells
of ague, pox, and plague smothered in snow,
which, like yourself these days, is not itself,
but lies there, still, and takes its form from all
it touches: soldiers, courtiers, vagrants, strays.

Why not get up and start something, some
monologue, some scene? Let me be in it
as a servant, and your boy—what was his name?
You know the plague took mine away, those mocks
and gibes that made his mother roar, all gone,
melting like snow into eternity. But sir, to live
is to endure such things. To let things be.
Why not give yours some speech, some shape?
Make him a prince. Say that we shall not die,
but shall be changed, that man’s a wondrous
animal, a thinking dust, a radiant thing.

My lord, here’s ink. Here’s paper. Look sir.
Master Shakespeare. Will. Do you not see?
It is for you all this is happening,
St. Paul’s and Bishopgate covered in ice,
the whole smashed glass of cloud and sky;
the highwaymen and hangmen, mongers, hawkers,
nobles, waifs, the shivering laundresses
and limping smiths, the carts and carriages
on endless show; for you their entrances
and exits; this absurd bright air and all
it touches. All these people. All this snow. 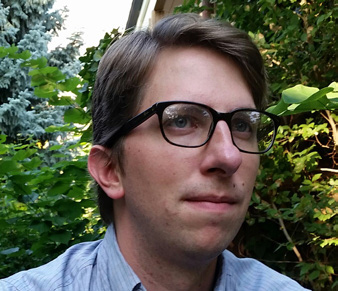 Michael Lavers is the author of After Earth (University of Tampa Press, 2019). His poems have appeared in The Best New Poets, Crazyhorse, AGNI, 32 Poems, The Hudson Review, The Georgia Review, and elsewhere. He teaches poetry at Brigham Young University. (updated 10/2020)