I say the sickness of the prison, contra
quaint authors, is not a canker
that corrodes and eats the body’s superial
parts, but an infirmity that comes
of corrupt air, the breath and filth
of many men together in little room, having
little open air

A man’s hair stands up_      _an impediment
come of cold rheum mixed
with melancholic humor, sometimes
from a foolish fear, when a man is by himself alone,
a frayed of his own shadow, or from a spirit,
or from a faint heart, a fearful mind,
a man’s follied conceit or timorous fantasy

Nightmares come of vaporous humor
fumosity rising from the stomach to the brain,
also through surfeit and drunkenness, or lying
in bed upright, or from rheumatic humor
suppressing the brain, and the humor descends
to perturbate the heart, to bring a man sleeping
into a dream, to think that the which is nothing
is somewhat*             and to feel that thing
that he feels not,       *and to see
that thing he sees not, with such like matters

Priapism comes through calidity and inflations
of the kidneys, or of the veins in the yard
or stones, or from the usage of venerious acts.
As remedy, first anoint the yard and stones
with juniper oil, or camphor, and flee
all manner of lechery. Smell rue
vinegar, or leap into a great vessel
of cold water, or place nettles
in the codpiece about the yard and stones

Contrarily, immoderate sleep and sluggishness
humect and lighten the brain, engendering
rheum and impostumes, inducing oblivio,
for it obfusks and obnebulates the memory
and the quickness of wit

All vaporous things, all fumes of evil savor
injure the head, as carrion, sinks, withdraughts,
piss-holes, candlesnuff, dunghills,
stinking canals and standing waters, marshes
with such contagious airs do hurt the head,
and the brain, and the memory

I was in this infirmity_     _and by great travail
I did make myself whole, more by labor
than by physick in receipt of medicines 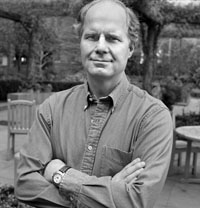 Charles Bardes is a physician who practices and teaches medicine in New York.  His book-length prose poem, Diary of Our Fatal Illness (University of Chicago Press, Phoenix Poets, 2017), narrates the illness and death of an aged man. Other poems, essays, and ruminations have appeared in AGNI, Raritan, Ploughshares, The New England Journal of Medicine, and elsewhere. Pale Faces: The Masks of Anemia (Bellevue Literary Press, 2008) is an extended lyric essay that probes the mythological and cultural aspects of a common disease construct. In 2018 he received the Blackwell Prize in Writing, which “honors a writer who exhibits exceptional talent on the printed page, as well as meaningful social commitments on the public stage.”  More info at charlesbardes.com. (updated 3/2020)