Thank God we don’t have to speak anymore
to the quirky clerk with his reeling mind.
Slick digital killed his video store.

Freedom’s in a button, not out our door.
I can browse in the buff behind drawn blinds
cuz digital killed my video store.

Where’s the half-beard who waxed Euro-film lore?
What old French flick would he force me to find,
pleading, Don’t forsake le cinema store?

Sure, there’s cultural loss in techno wars,
but who cares about Blockbuster’s decline?
Digital killed all her video stores.

All praise the next, new, quicker, promised cure
of spatial contact between humankind.
We don’t speak to each other anymore.
What else got killed with the video store? 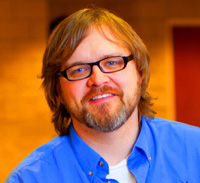 Gary Dop—poet, scriptwriter, essayist, and actor—lives with his wife and three daughters in Minneapolis, where he teaches creative writing at North Central University. He received a Special Mention in the 2011 Pushcart Prize anthology, his essays have aired on public radio’s All Things Considered, and his poems have appeared in Prairie Schooner, AGNI, Poetry Northwest, New Letters, Rattle, _North American Review, _and elsewhere. (updated 2/2012)