Editor’s Note: Filmmaker and photographer Robert Gardner was a longtime contributor and a generous supporter of AGNI. After seeing our issue #66, in which—an AGNI first—we had included a CD of Welsh tenor Timothy Evans, Bob approached us with a proposal. He had made a short documentary film, Good to Pull, of AGNI artist Michael Mazur in his studio, using ink and glass to produce a monoprint—the medium he was most famous for. Gardner wondered if we might not be interested in publishing the film as a DVD supplement to issue #68, whose art insert would then feature broadsides in the same series: Robert Pinsky’s translations of Dante illustrated by Mazur. Of course we did not hesitate. And the result was a compelling fusion of expression and process from three supremely gifted artists (four if we count Dante Alighieri). A few years later Bob approached us with another irresistible offer. He had been cleaning out his office and had found a large number of previously unpublished photographs of poet Robert Lowell. It turns out that Bob had been the photographer for the author photo of Lowell’s historic collection Life Studies (1959), and these were images from the same session. We learned later that Gardner, a member of the prominent Gardner family of Boston, was also a cousin of Lowell’s. A stunning suite of his images was published as the portfolio of AGNI 75.

Robert Gardner, who died on June 21st of this year, had a career rich and influential across a wide spectrum. Aside from making his award-winning ethnographic documentaries and publishing books, he also founded and ran the Film Study Center at Harvard. We cannot do justice here to achievements and legacy—what we can give (his last offer to us, made shortly before his death) is a short film of Bob in conversation with writer Peter Matthiessen, another legend who died this year. The conversation is introduced here by our poetry reader and area film maven Erin Trahan. 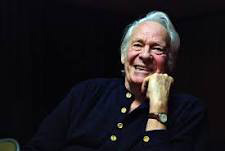 Robert Gardner (1925–2014) was the maker of many documentary and ethnographic films, among them Dead Birds, Rivers of Sand, and Forest of Bliss, which the Library of Congress have included in their list of most important American films. Gardner’s films took him to Netherlands New Guinea (now Indonesia), Ethiopia, Nigeria, India, and Spain. Gardner studied art history as an undergraduate at Harvard University, and as a graduate student, he was the first to teach courses there on the subject of film. In 1957 he founded Harvard’s Film Study Center and was its director for forty years. In 1979 he co-founded the Harvard Film Archive. He also produced and hosted “The Screening Room,” a series of nearly a hundred ninety-minute television programs on independent filmmaking and, more recently, founded the small cooperative art making endeavor Studio7Arts. Gardner wrote several books, including The Impulse to Preserve: Reflections of a Filmmaker and Making Dead Birds_: Chronicle of a Film_. He also won numerous film prizes, including the Flaherty Award twice, and in 2005 he was given a Lifetime Achievement Award by the American Anthropological Association.