She was screaming I hate you I hate you I never loved you and I swear I just wanted her to stop yelling. She was kicking at me and I had my arm around her and there was blood because her lips were so dry and when she bit me I pretended I was going to spit on her face like that would stop her. If she got me where she wanted to get me when she started kicking it would have been one and done. Me on the floor rolling around. Only she’d still be yelling and I’d have no control over what was happening then.

When we’re nearly done she starts on about her father while she’s gasping for breath and how he’s coming soon to do his glorious rescue. He knows all about you, she says. The kind of ogre you are. And my brothers too. One of them got smashed up in a wreck and the other used to grope her so I’m thinking they’re not the most reliable allies. No more than the friends she invents. She used to say she didn’t have any before me. Now it’s she doesn’t have any because of me. Clever. Right from the start she’d use words like they were riddles coming from out of nowhere. Do you ever get manic? she asked me at the beginning. Do you ever get manic and want something to tear you or fill you? Just a little? Not for long but so it feels like your skin is coming undone and someone is getting in there? Getting in where, I asked and her eyes went wild.

I don’t say anything after a certain point because when I do she gets louder. And her jaw sticks out further if I try to go on. Even if I just take a quick breath and move my tongue to the top of my mouth. Don’t you dare cut me off, she says. You’re not the only one who gets to do the talking. She sticks her fingers in her mouth and bites into the edges of her nails so there’s always dried blood. Sexy. Absolutely anything can start it. Any little question I dream up. How was your day? Do anything today? Oh your dad called did he. How’s he been? She turns it all around fast. You know I didn’t do anything, she says. Yeah I do. Because when I come in she’s sitting there in the dark and you just know she’s kept it dark all day. So I ask her what the problem is. Don’t call them problems, she says. They are issues. That’s the word and you know it. Issues can be got through. I tell her problems can be solved and her eyes go even wilder.

We always make sure and do something else once it’s over. Then it’s fine for a bit. Safe fine like no one wants to start it again so we get a little lull. She cleans up a bit and washes her hands and her face and we go outside with her squinting because of the sun and her puffy eyes. In the spring she likes the ducks in the square. The same two come every year. She feeds them sometimes but usually the man from the art studio on the corner is there first and her face bunches up. Neither of us really says anything except nice little things that wouldn’t bother anyone. Like how’s your brother or what about the beach tomorrow, though there’s no way in hell we’re going.

I think she works on her lines while we’re out. Because she hardly says anything. Then later she’s primed to go off again. Answer me so help me, she likes to say. You are not even looking at me, she says, you are not even paying attention to me I don’t matter to you. Lots of people live in this building you know. They all have ears even if a lot of them are off to bed by the time we get around to it. She talks fast one word one word one word boom boom like they’re almost connected and getting louder. Then I look over my shoulder and wait for the doorknob to turn all in a spasm and then the first splinter when they kick it down like this woman needs to be saved and let’s go. The police are like that. Like every drunk guy in every pub when he gets the chance to play hero.

No way the heroes would knock first. Not with her. Screaming. You this and that. I jump through hoops for you. If anyone knew what I go through with you. Oh yeah this is what I wanted when I was a little girl someone just like you—Please, I say. Don’t you know how loud you are we can’t do this in here. Oh I bet you’d like to get me somewhere alone where no one can hear me you monster I hate you. You have taken everything from me my friends my family my dreams my hopes everything everything everything. I hope not. But I know she wouldn’t believe me if I said so. And even if I tried she’d think I was being sarcastic and it would only make her louder.

Write me a letter, she said a couple of times. At least a couple of times. You can write me a letter. I asked her what kind. You know. I asked her if I could just say it. Write it, she said. So I did. I said sorry for all the times it got out of control and said that her being loud wasn’t an excuse for what sometimes happened as a result. She taped the thing in the downstairs hallway for everyone to read. All the people who hear us must have seen it because I don’t get up early since I don’t have to. And wouldn’t you know someone took it down and stuck it under my door with a note on building stationary. This is a peaceful building. The next time we will notify the police. I think a mall cop lives here since I always see the guy in his uniform and he doesn’t have a gun or anything though he does have a walkie-talkie and a holster for it. So maybe he’s the crusader for justice. But the teenage kids downstairs have been peddling blues for an age and it’s not like he’s ever felt a need to step in there. Even with half the town coming and going to get their drugs. Though you won’t be reading about their latest sales on an advert taped up in the fucking foyer.

I used to believe in the lulls. That a lull would become something lasting. The new way. No one really says anything during the lulls beyond asking what’s good on television tonight or is there any margarine left. Then anything can start it up again. Here’s your food, she says. I got it today fresh at the market. The fish market. And you know how crowded that is on Fridays. I guess I do. I ask her how her day was and she says, you know. No tell me, I say. And then she starts to cry sometimes. But when I don’t ask she gets angry. You don’t care, she says. You never cared. No one cares. She bites the skin around her nails and the blood starts. I made you your dinner, she says. Maybe I can at least do that right. I tell her I wasn’t trying to make some kind of comment about her. You never are you never are and you never will so help me. Have your fucking fish, she says, and sort of tosses a chunk of haddock on the plate and slides it so it falls in my lap. It is just like you not to like it. She shrieks out her words and I try to cut her off. You are louder than God, I say. That makes her laugh. A mean laugh that goes on and on. I try to look at her but I am not good at it. I try to look at her and say something without really saying anything like why did this have to happen and why do we have to do this. She stares at me hard like she’s making up her mind to do something. Then she tells me she hates the way I treat her. That I am an animal that keeps her away from any kind of peace in every possible way. I want to go home, she says, and jumps on the bed. She hits herself in the head and screams and I put my hand over her mouth and she bites me and we fall to the floor. I used to keep an oven mitt under the bed but it didn’t stop the sound. My father would—your father is not here now, I say. Or John or Craig or Emily or Jane or Rodney they would—you made those people up, I say. I hate you, she says, and she’s crying. Of course you do, I tell her. I hate you. Under the covers the words seem to stay there. While her face is still wet and covered with her hair I watch her breathe with her nose down in the pillow. Do you think it will ever get better? she says. Me I mean? And us too? I don’t know, I say. I guess so. Good, she says. I’m sorry. Are you listening to me? Yes, I tell her. I really am. We can talk about it tomorrow. You know I don’t—yes of course I say. You know I would never—yes, I say. Even though—yes even though, I tell her. Even though I can hardly tell her I hate myself for the things I do. It’s not like I don’t know. And we’re just there like pebbles in a brook, she says. Or like apples off the back of a truck that no one finds again. 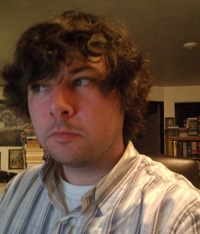 Colin Fleming’s recent fiction appears in Black Clock, AGNI, VQR, Boulevard, The Cincinnati Review, and Post Road, with other recent work published in Boston Magazine, The Atlantic, Rolling Stone, Vanity Fair, and The Washington Post. He is the author of The Anglerfish Comedy Troupe: Stories from the Abyss (Dzanc Books) and is completing both a novel about a reluctant piano genius called The Freeze Tag Sessions and a nonfiction work, Same Band You’ve Never Known: An Alternative Musical History of the Beatles. He’s a regular contributor to NPR’s Weekend Edition. (updated 10/2015)