I don’t believe you, she said to him, as the sun sat on the edge of the hill.

And you said this was a mountain but it’s really a big hill.

It is a mountain, he said. It’s over a thousand feet above sea level and that makes it a mountain.

She stared hard and suspiciously at him, not sure what to say, and finally out of instinct said, I don’t think that can be right.

What would you know? he said, annoyed. You live in the city right near the beach. You live at sea level. What do you know about elevation?

She wasn’t entirely sure what he was getting at, but she wasn’t going to say so. Instead, she shook her gleaming blonde hair just because it was there to shake, and she thought it’d look special against the sunset.

He noticed. Your hair makes black lines against the sun.

It’s not black. There’s no black in it. It’s a hundred percent blonde. She thought she should be as precise as possible with the boy. What’s more, she continued, Mother says it’s ‘translucent’. She thought she had him with that word.

That may be true, he said, but with the sun like that your hair blocks the harsh rays and makes it look like a squiggle of black lines.

She was offended now, and no longer wanted to wait for the purple he claimed would fill the sky around the mountain, going into the mountain itself, when the sun dipped below the horizon. She’d asked him why he’d called that hill a ‘purple mountain’ and he’d said, I’ll show you before dinner. It turns purple most days, especially in summer.

Aware that he’d pushed things too far, he pulled back. He was delighted this girl was visiting from the city, and he tried to regain lost ground by distracting her, rekindling her interest.

At dusk there’ll be bats in the sky, he enthused.

Bats? she cried. No!

Yes, bats, he said, pleased with her reaction.

He wanted to say yes, to frighten her, but that wouldn’t achieve anything. Well, it might in time—over days and weeks—if he had time, but she was there only for the afternoon and evening, so he didn’t want to take the risk.

They were both silent, and fell to watching the sunset with their own thoughts, their own intensities.

We watch sunsets at the beach all the time, she said. There are so many reds and oranges and purples in so many patterns, especially when it’s cloudy. I didn’t know the colours reached this far away from the sea.

Yes, it’s wonderful, he said, and shortly the mountain will go purple. And then it will be grey and black like the sky. The bats will come in the grey, at dusk. If you throw a rock or a stick high up into the air they will go for it, thinking it’s alive, something they might want to eat. And you can hear them the whole time. You can hear their wings flapping flapping flapping . . .

Soon the two of them would be called into the house for dinner, and there were mosquitoes about, but they stood transfixed, caught in the stretching and contracting of time as the mountain went purple and loomed massive before them, loomed much greater than any hill could loom, then blackened as the sky went grey.

I think I can hear a squeaking sound, she said, though she thought she might be imagining it. She wanted there to be bats.

Bats echolocate, he said seriously, and moved ever so slightly closer to her. It’s how they see in the dark, he confided. They see with their ears, because they are . . .

Blind as a bat, she said, and they both laughed quietly.

They hear their own sounds come back, he added, after a moment. They send sounds out of their throats that bounce off things and come back and tell them the precise shape and movements. The boy felt his description was getting lost in the words, so he added, They can see an insect flying at night through their ears.

She believed him. It was truth, she was sure.

Throw a stone up in the air, she said suddenly.

And he did, immediately. In the half-light they saw a small black entity swoop out of the grey and twist about the stone as it reached its apogee, before flashing darkly away.

I think there are a lot of bats out this evening, he said proudly. There’ll be heaps later tonight. It’s all the Bogong moths about. They love eating Bogong moths.

This confirmed her growing belief in the boy. On arriving at the strange house she’d felt revolted to see the verandah lampshade filled with hundreds of dead moths. It’s the Bogong moths, the boy’s mother had said, when the boy was still down at the machine shed with his father.

Now the girl was really quite happy to be inland. It was warm and dry-smelling, and the mountain had been purple. The boy had told the truth and she trusted him in the thickening dark. He was bigger than her, and seemed someone she could lean on if she had to, though she’d never have to, she was sure. And there were bats. Best of all, there were bats. She wondered what they looked like, really looked like, up close. And then she shook her hair in the dark-light with excitement, thinking she’d light up the night with her blondeness. She did this for herself, but also for the boy, the mountain and the bats.

And at least one bat heard her. There was a pulling and a tangling and a clawing in her hair and she screamed a short, stifled scream.

There was a bat tangled in her hair. The boy knew straight away and took her arm and directed her towards the lights of the house. Keep calm, he said, bats often get caught in people’s hair. Keep calm or it will tangle worse.

She was sobbing but his steady matter-of-fact voice kept her calm. She knew the bat must be confused and in terror—this knowledge overrode everything.

The boy was amazed at her “self-control,” as his father would have said. Get some self-control, son! And here she was, terrified and in pain and in control. It was as if a spell had been cast. She wanted to tell him that she didn’t normally swish her hair about, it’s just that it was a special day. That it was because of him.

They reached the front door and he called inside for help. The adults rushed out, her mother instantly upset, her father looking sheepish. Somebody said, Calm, calm . . . scissors, we need scissors. And the scissors were found. Leave plenty of hair around the bat or it will get hurt, the boy said. And the girl, gritting her teeth and fighting the ultimate hair fight, said the same.

Nasty bat, said one of the mothers. And such beautiful hair.

It looks repulsive. Looks like a dead hand. Watch its little claws. And those teeth!

I am sorry, darling, but you’re going to be a sight by the time we’ve got this beastie out, said the boy’s mother, all practicality and dexterity.

I don’t care! I don’t care! exclaimed the girl. I . . . and then she paused to feel the bat clawing and making a distressed sound, maybe echolocating the scissors and her hair and her skin and the blood pumping warm beneath. I want to see it, she said.

But the girl no longer cared. I want to see it!

And she did—caught in a hank of her hair. Entangled and frightened. She stared at it with wild eyes, then looked to the boy who had been closely watching the operation. Take it, she pleaded with him in a way that made the adults shrink back. Take it and let it go so it can fly back through the dark to reach tomorrow’s sunset, to wake when the mountain is purple, to fly into the dusk, the night.

The bat was placed on the verandah, struggling under the moth-light in the net of translucent and blackening hair. It started a slow, agonising clawing towards the edge of the verandah.

The boy flew from the verandah, through the flywire door, to his room, where he retrieved an old shoebox. By the time he was back, the bat had almost plunged over the edge, watched by the stunned and possessed. Deftly, he scooped it into the box with the lid.

Be careful! his mother said as the boy gently pulled strands of hair away from claws and membranes between limbs, watching the sharp teeth, the tiny half-moon eyes, the veined ears, the fur.

Come inside now, said the girl’s mum. You look a fright, darling. She kept saying this as if to soothe herself.

No, please, Mum. I want to see the bat fly free.

So the adults stepped gingerly inside, unsure about everything, watching through the window as the girl and the boy worked together to disentangle the bat.

And then it clawed its way up the wall of the box to the edge as the last strands were extracted, its heart visibly beating in the vein-work, through the fur, mouth open and panting. The boy said, It will remember you forever and it will tell the other bats of the light in the dark, how it really saw you.

She smiled, and reached without thinking to the bald spot on her head.

As the bat suddenly flew into the darkness, they grabbed for each other’s hands, and the boy said, I like your hair like that. 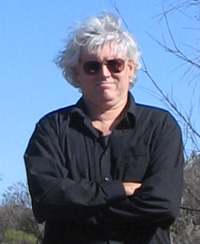 John Kinsella’s new book of stories, Pantheism, is forthcoming in Australia in late 2020; his new book of poetry, Insomnia, is forthcoming from W. W. Norton next year also. His critical book Polysituatedness was published by Manchester University Press in 2016. His Activist Poetics: Anarchy in the Avon Valley was published in 2010 by Liverpool University Press. He is a fellow of Churchill College, Cambridge University, and professor of literature and environment at Curtin University, Western Australia. (updated 9/2019)