When my baby is almost five months old, I start learning Latin from a textbook written in 1946 for men who had survived the war and came home to study at Brooklyn College under the GI bill. It’s one of those things I’ve always wanted to do, like getting over my fear of heights and making the spidery trip up a sheer cliffside in the Rocky Mountains, like winning an award, like meeting the love of my life. As I tangle myself up in cases and declensions, in quids and quos, I think about those hollow-faced boys coming back to America, happy to be studying, or maybe feeling heartsick. Numb maybe, or waking up screaming. I think about Frederic Wheelock, lovingly designing Latin lessons for these boys, or these men, and about his wife, Dorothy, typing up the manuscript in Mexico while their children ran around beside her. My baby’s father says, “You’re not that accomplished on paper, but you feel accomplished,” and I think it’s the meanest thing anyone’s ever said to me, but then he says he means, You’re not that accomplished on paper, but it feels to me like you’re accomplished. He means, You give off an air of accomplishment. He doesn’t mean the thing I thought he meant. It’s those endings, those cases, that trip me up learning Latin, that tripped up all those soldiers seventy years ago who were learning Latin.

I’m reading a book full of rich people’s vacation houses and lofts, with text about how these spaces embody “purity” or “whimsy.” There’s a New York fashion designer’s home spa, with a picture of a child monk from a poor Asian country hanging over her white massage table. “We wanted Donna to start her day with as much light and serenity as possible,” says her decorator. I get maddest at my baby’s father when he talks about how my ideas of a good life are grandiose or “pipe dreams,” when he talks about “the real world” as if it’s a place of anything other than beautiful, crazy variety, of surprises and blindsiding, of outrageous fortune, of fantasies that come true and fantasies that don’t. In Manhattan, the island that I love and that he hates, you can be drinking wine with movie stars one night at a garden table where everyone is looking at you with glowing eyes, laughing at your jokes, and then ten months later you’re on Medicaid, and somehow you have no friends, and then maybe you turn into one of those people on the subway, muttering. In Latin, the phrase for stupidity, dullness, numbness, and shock can also mean wonder or amazement, stupor mundi, the wonder of the world. My dreams and pipe dreams were never about real estate before. In some ways, I didn’t want to be accomplished—I wanted to be raw, pure, in-progress, unfinished. But now that my mind is gone, now that I’ve been stupefied, now that I have the surprise of this tiny girl in my life, I am greedy. I want square footage. I want safeties, securities, assets, bonds. I want fame and power, victory, I want a thoroughbred mother for her, a beauty, a winner.

I’ve been thinking about destiny—whether it exists, and how it works. I’m reading about Euclid and Democritus, about what lies between two points on a Euclidean plane. Democritus would answer, Nothing. He would say, There is nothing in nature other than atoms and the void. Before Democritus existed in the world, there was his predecessor, Parmenides, who thought, What is, is, and what is not, is not. The world’s shapes and forms (Latin, forma, beauty) are beautiful and stupefying, but maybe they aren’t real, maybe they’re imaginary. Maybe when we predict forms or functions, when we predict the twists in a life story, we’re actually just inventing them as we go along, actually just giving flat-lying things a local habitation and a name. I wonder if you can take a wrong turn in life, a wrong turn in your story, if you can be born to the wrong parents or if you can be sitting at a dirty kitchen table with the wrong man. I wonder if you can go astray (Latin, error, a wandering) or if, actually, all paths lead to the same place . . . if all errors are adventures . . . if every atom and every wave or particle of light is equal to, congruent with, every other atom and wave or particle of light . . . if equality exists, equality of shapes or of points or of life stories or of accomplishments or of babies.

My baby’s father and I think about leaving the city—about driving west and buying a house with a tree swing in the front yard and a white picket fence, hiking in national parks all the time, making pickles. It makes me think about a Yoko Ono art experiment, City Piece I: “Find a spot that is comfortable for you. Keep the spot clean. Think about the spot when you are away.” It makes me think about the spot in Manhattan I’ll be leaving, and about the famous people and the homeless people on my block, and about Yoko Ono herself, with her chic short hair, looking younger than she is, and about how she’s a mother, and about Philip Seymour Hoffman and his heroin overdose, and how he was a father, and about Lou Reed who just died, and that line from “Coney Island Baby”—“Just remember that the city is a funny place, something like a circus or a school”—and about how I never quite managed to keep my spot clean here, how maybe I won’t think about the spot when I’m away. My baby’s father and I look at pictures of the perfect home, of that swing, of the miniature house out back for a little girl to play in, right near where I would plant huckleberry bushes for making jam. “Just buy that house,” I tell my baby’s father, even though we have no money, even though it might be a pipe dream, not just the house part, because sometimes money appears or disappears, but that whole refiguring of time and space, that whole hairpin turn in our lives. It would be strange to be moving in the direction of the sunset.

Meanwhile, I’m still in New York, at the bottom of the city instead of at the top of it. It’s Valentine’s Day. I’m thirty-nine and a half, my baby is five months and two weeks old. A friend from years ago is visiting from somewhere on the West Coast. She texts me, sitting in a booth in a hotel on Eighth Street with the star of a popular TV show. She’s planning to go to a dinner tonight with the man who is not my baby’s father. Last Valentine’s Day, he gave me a sweet pink cupcake. This year, he sent me a picture of his house covered with snow. I’ve recently learned something I didn’t know about my baby’s father, something big, or something small but the fact of it is big, it’s like turning on the light in a dark room and seeing cobwebs everywhere, seeing how the floor is covered with dust. I’m reading Treasure Island aloud to my daughter, I’m thinking of jewels and adventures, I’m imagining the taste of good rum on my tongue and throat, the way rum like that would taste to a connoisseur. My daughter is listening to the sound of my voice. She’s learning words for later, words that will change meaning every time she uses them, or in the days or years she doesn’t use them: threshold, storm, romance, nightmare. If I sweep the dust off the floor, I wonder if the floorboards will be rotten underneath. I wonder if something, or nothing, will be hidden in the closet, in the chest upstairs.

I’m reading Yoko Ono’s Connection Piece IV: “Swim as far as you can in your dream. Away from: your home your mate your children your pets your belongings your workplace your colleagues. See if you drown or survive.” In my dreams I fly over New York City, or get engulfed by tidal waves. I’ve heard that the dream where your tiny Manhattan apartment has secret doors and extra rooms is common here, lots of people have it, it’s a thing, a thing like that disorder that happens in African cities, where men suddenly tear off their business clothes and run naked through the streets. In a dream I had years ago, I found a door in my bedroom, and past it were grand rooms filled with beautiful furniture—rooms like in an old Greta Garbo or Luchino Visconti movie, the rooms of a mansion or of a palace. In one of the rooms, there was a strange animal that I recognized, and my baby’s father was there, he had made my apartment bigger, he had made it a place to live that was big enough for me. When I woke up, I described the animal to my baby’s father and he said, “Oh, was it a Tasmanian tiger?” And it was, of course it was—an animal that was never really a tiger. A ferocious animal that no longer exists in the world, dead as Latin.

When my daughter is five months and twenty days old, we make our first trip to the zoo. We pick the one in Central Park, and to get there we walk through the wintry Ramble, from the west side to the east side. The paths are slippery, lined with the skeletons of trees, and the parkside buildings look gray past the snow. My daughter’s father carries her against his chest, he holds my hand so I don’t slip on the ice. My daughter loves the sea lions, and the penguins. She looks at them with her eyes too bright, like she’s falling in love, or like she’s eight hours into the kind of acid trip where you meet the god you grew up believing in, or you pass through a few bardos toward death, or you meet a new and unknown god. The animals are leaping into and out of the water, happy, like they’ve never felt trapped. 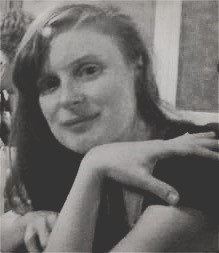 Elizabeth Bachner is a sociologist and writer.  She has a column on readers, writers, books, and single motherhood at Hip Mama, where she was a writing contest winner. (2/2019)