I am a garbage man’s daughter. I am a second-generation Mexican, fourth-generation Polish immigrant. I am a college graduate and poet. All because my father crossed a line.

My father was born in the small Mexican town of Las Peñas, Nayarit, and raised by his mother and grandfather. With eight other siblings and a father who drank heavily, the family struggled to feed themselves. The day he graduated high school, his mother pulled him aside and told him he’d make the journey to the U.S. He had older brothers, but my abuelita believed him to be the most likely to survive. And so, at the age of seventeen, my father began to run.

He rarely speaks of his experience crossing the border illegally, or the overwhelming responsibility he carried with him, but the lines in his hands never let him forget. His skin mimics the cracked earth where other migrants’ bodies lie unmoved, “lo sientos” never reaching their families back home. The lines on his palms tell stories of getting lost, running fast, and telling his mother, “Ya llegué.”

My father and I were singers in the early morning when the sky was velvet black. His day started at 2:15 a.m. when he’d carry me to his pickup truck and drop me off at my Tia Rocio’s house twenty minutes away. I’d stare out the window and try to count the stars. I remember being confused that morning could be just as dark as night. Our drives taught me that my father worked under la luna y el sol—both gave him parts of themselves: his black hair, his tan skin. When I grew tired of looking out the window, I’d stare at his hands on the steering wheel and try to picture him driving his garbage truck for the next fifteen hours. I couldn’t imagine anyone staying awake so long. When I began to drift off to sleep, my father would ask me to sing “El pescadito del agua.” Eyes half-closed, I filled the truck with my small voice and took my father back to Mexico.

I recorded my father singing “El pescadito del agua” in the summer of 2019 while he was recovering from pancreatitis. Despite three months in three different hospitals and a month in rehab for physical and occupational therapy, he was alive. I sat him in the armchair in the living room and asked him to sing, the way he’d asked me every morning when I was a child. I told him how each time he’d almost died in the hospital, I’d cried at the thought of forgetting his voice. I set my phone between us to record him, and he asked if I was ready and cleared his throat. The smell of death makes some people talk. It makes my father sing.

On the recording, my father trips over his Spanish, his tongue trying to remember how to stretch and curl around words. He had to be taught how to do everything again—tie his shoes, put on pants, comb his hair, swallow water, distinguish his daughters from strangers. He sounds tired, his words like the last of the honey crawling to the tip of the bottle. His pronunciation of the stress in pescadito is different than it used to be. I replay the seventeen-second clip of him singing until my phone warns me it’s about to shut down.

In the Polish Chicago neighborhood of Cragin, my days were divided by language. I spoke English with my mother as she got ready for work, Polish with my babysitter, Dorota, who lived across the street, and Spanish with my father when he returned home. No one other than myself could speak and understand all three.

One day after school, when I was in ninth grade, my father took me to McDonald’s for ice cream. I sat in the passenger seat, new cell phone in hand, and cringed as his lips moved to say, “Two cone ice creams.” I faced him, cheeks flushed, and told him he’d said the phrase wrong. Did it really matter? he asked. In that moment, it did. I remember counting the years he’d lived in the U.S. and asking myself why he still didn’t know English. But my father was unaffected. He held his cone, singing along to Mariachi music in his garbage-truck uniform, the windows down. I held my ice cream so long it dripped down my hand. Even after fifteen years, my Spanish wasn’t perfect. I looked at the CDs in his truck, the phone in my lap, my private-school uniform, and kept each bite of ice cream in my mouth until my teeth ached from the cold. His English was enough.

The term broken English suggests a mouth with chipped teeth. It implies there’s something to be fixed. It’s ugly. My father’s English isn’t broken, just Jabberwockish—the words stretched, shortened, repositioned, and sometimes mysterious. My own speech is tinged with absurdity. Different tones, pronunciations, and dictions collect in my mind like catalogued voicemails. When I can’t remember a word, I leaf through to play a past conversation and hear what I’ve forgotten.

During a Spanish exam in high school, I couldn’t recall the word espalda. I stared at the outline of a man with an arrow pointing to his back and panicked. I repeated the English word, hoping it would help me. Back, back, back. Nothing. Pleców, pleców, pleców. The Polish didn’t help either.

Several times during my childhood, my father had injured his back at work. I closed my eyes and rifled through old conversations with him. I imagined him lying on the carpet in our living room. It was a Sunday and we were watching Looney Tunes. I listened as he laughed at the scurrying cartoon animals. Then he shifted and complained about his espalda.

I opened my eyes and filled in the answer.

While I study and write poems, my father invents a language: kik-a-da-kee, fi fa, lunchee. For him, the embarrassment or shame of forgetting a word is reframed as a chance to be remembered. You need to chill out? Kik-a-da-kee, man. You going to the beach? Put on some fi fas. You hungry? Eat some lunchee. These words fill the void of what’s been forgotten, and for me they’re also a reminder of his support. When I tell myself to relax, I hear his voice. Kik-a-da-kee. It’s an added layer of comfort.

In my house, people slip in and out of personhood. My father’s use of the pronoun “it” forces people to listen closely and determine what or who is being referenced. When I was fifteen or so, I ran into my father as I left for a friend’s house. He asked if I knew “where it was.” I waited for him to explain, but he thought I was ignoring him and instead repeated himself.

“Do you know where it went?”

“Seen what?” We were both frustrated. “I don’t know what you’re talking about.”

He sighed. “I can see my future down the drain.”

“Tell me what you mean, then! How can I help you find something if I don’t know what you’re looking for?”

The word “room” tipped me off––he was referring to Louisa, my younger sister.

“Oh, she’s at her friend’s house, I think. Sorry, I thought you meant your glasses or something.”

You can always tell what movies my father’s been watching by the English he uses. It’s one of my favorite things about him. He loves Disney films, specifically the animated ones. Phrases like “say it to my face, you limp noodle” from Mulan and “Ohana means family, and family means no one gets left behind” from Lilo and Stitch quickly became staples in our house. When Moana came out, we watched it three days in a row. Once, I made the mistake of wearing a cucumber face mask in front of him, and my name became Yzma, after the antagonist from The Emperor’s New Groove. I used to think he loved movies because he wasn’t able to see many as a child, but now I know he’s drawn to them because he loves falling into stories. Movies are more than visual distractions for my father—they let him picture himself in different lives. In movies, he doesn’t wake up at 2:15 a.m., work six days a week, and stress about bills. He can laugh freely. He can escape.

Though he’d never admit it, I think my father wants people to know what he’s gone through. After his pancreatitis, I’d spend hours listening to him talk about his life in Mexico, the years before he met my mother, their time before me. When he cried, we’d look away from one another.

My father and I are particular about when and how we share our experiences. Our vulnerability has evolved into stubbornness. Opening up repeatedly is like picking at a scab—there’s evidence of both the wound and the healing.

I was a junior in college the first time my father called to catch up. I stared at the screen, convinced there was an emergency. I couldn’t think of any reason he’d have to call me—I no longer lived at home, so I couldn’t run to the store for tortillas or stop by the bank before it closed. When I answered, we were unsure what to say to each other. I paced in my dorm room while he drove home from work, both of us moving through the silence.

With time, we’ve found new commonalities: movies we’ve both watched, our latest Goodwill finds. The first time he told me over the phone that he loved me, I stood stunned. I wanted to ask if he was okay, but I didn’t want to embarrass him or give him a reason to regret what he’d said. Before I could say anything, he ended the call. A few weeks went by, and I reassured myself that the next time we spoke, I’d find the courage to say it back. 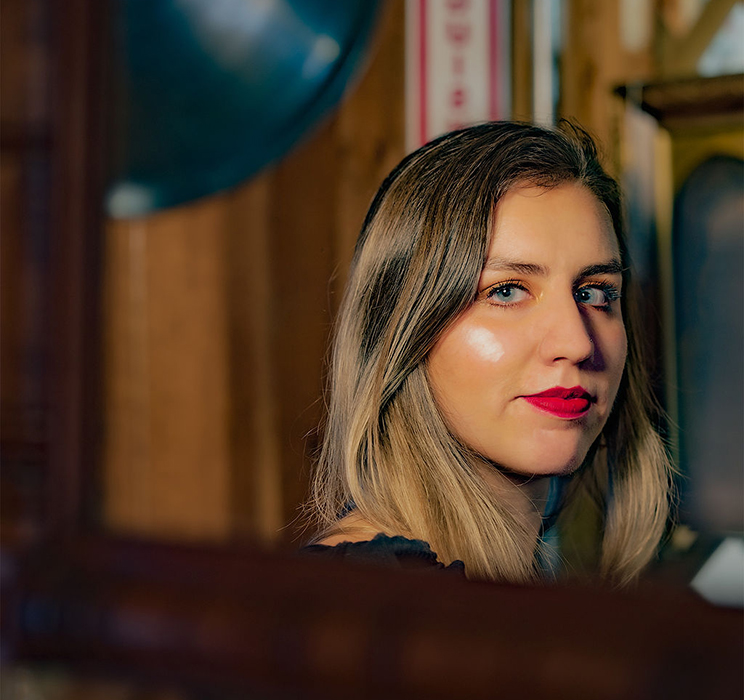 Sonya Lara’s work has appeared or is forthcoming in Heavy Feather Review, AGNI, ENTROPY, Homology Lit, The Los Angeles Review, The Acentos Review, and elsewhere. She is an MFA candidate in poetry at Virginia Tech. (updated 04/2021)