“I have no imagination,” said Simenon. “I take everything from life.”

I published a story called “Breaking and Entering” in Agni 78. We called it fiction, but everything in it happened.

The story Cathy tells Dennis was told to me by my friend David about a girl I promised never to name.

I broke into the Clausens’ house with my friend Mike. In the story, it’s Emmett and Tamara’s house.

My poor uncle Jerry lost his mind on morphine in hospice at the end of his second round of pancreatic cancer and sent me an Obama-is-Satan email.

Emmett and Tamara’s loud argument was P— and R—. Their loud make-up sex was Alex and what’s-her-name.

That business with the lock-picking is a bit of hero-worship. I had a coach who had apprenticed as a locksmith, and I wanted to be like him in every way.

My father whipped the kid I call Little Murphy. I mean he whipped him black and green.

A couple of Melissa’s friends went ripshit when they learned Ingrid had given Susanna the name of Nancy the crazy dress-maker, and I offered to walk them around back of Bowdoin Street and take their teeth out, whether simultaneously or in alternating shifts.

The Dog Man was real. He lived on Brandeis Avenue.

My mother, when she was hungover or just tired, used to take me out of school so we could go to the movies. I saw a lot of movies that way.

I once saw a neighbor’s wife standing naked in her window, and she saw me see her, and she stood there and stared, showing herself to me. And so on.

A desperate wish that life should make sense led me to pretend these smash-and-scatterized events had an cause-and-effect relationship I could perceive. Order is the supreme fiction.

“By the sixteenth century fiction, whether in poetry or prose, was unequivocally called lying,” writes Bruce Wardropper about El ingenioso hidalgo Don Quijote de la Mancha. “The poetic mode, since it was expressly designed for this pleasant lying, at least deceived no one. Prose, however, the vehicle for legal documents, for sermons, for history, was considered to have been abused by those who made it carry the falsehood of fiction.”

Romain Gary pretended to be Emile Ajar and a lot of people got upset when he won the Prix Goncourt for a second time. But Romain Gary himself was a fiction; there never was anyone named Romain Gary. His mother called him Roman Kacew. He also went by Fosco Sinibaldi and Shatan Bogat.

“Kenneth Robeson,” who wrote the Doc Savage stories, was mostly Lester Dent, a real person, but “Lester Dent” was also Paul Ernst, and Ron Goulart, and Evelyn Coulson, and many others.

William Walker Atkinson published as Theron Q. Dumont, and as Theodore Sheldon, and as Swami Panchadasi, and as Baba Bharata, and as Yogi Ramacharaka, and as Swami Bhakta Vishita. His real name, the one that told the truth about truth, was just another one of his aliases: Magus Incognito.

“J. D. Daniels” is a fiction. Two-thirds of the people I know call me Johnny. The other third call me David owing to a decade-old clerical error I never bothered to correct. There’s no point naming a cat, a cat doesn’t come when you call it.

The fiction of a usable childhood. The past is a carnicería, Orpheus. Don’t turn around. 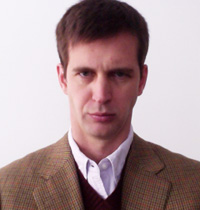 J. D. Daniels is the 2013 recipient of The Paris Review‘s Terry Southern Prize. His “Letter from Majorca” appears in Best American Essays 2013. His writing has appeared in The Paris Review, AGNI, n+1, The Oxford American, and elsewhere. (updated 1/2015)