I’ve been teaching writing long enough to recognize that the vast majority of the undergraduates who enroll in fiction classes at my university hope to write novels. A sizeable cohort are also interested in ultimately writing for film, games, or comics. Another grouping doesn’t really see itself writing anything at all after graduation. The number of students who walk into the room with an active interest in writing short stories hovers somewhere between a handful and, more often, zero.

And why would the number be higher? The fiction reading they’ve done for fun is all novels, not short stories, and sometimes exclusively YA novels. I want to harness the things they already love, not disparage them. I want the writers I work with to be able to pursue the kinds of projects they’re most excited about, which means allowing them to turn in novel chapters and multimodal work. But I also want to evangelize for the short story form, which in practice has meant evangelizing for magazines like AGNI.

Short stories offer aspiring writers opportunities to isolate and attempt certain technical moves, work certain creative muscles, and actually revise a project towards completion. In a semester-long class it’s obviously much easier to read, digest, and discuss a variety of stories than multiple novels. But to try and sell students on stories in these terms risks demoting the form to a pedagogical tool.

Students who have no awareness of the existence of literary magazines, in print or online, are almost inevitably going to see short stories as a creature of the academic workshop or the anthology, and nothing in between. Whether or not creative writing classes train students how to submit for publication (and I understand that there are arguments for and against this), I think it’s important to show aspiring writers that publication opportunities for short stories at least exist, that writers choose to work in this form, and that it is a living form, a creature that exists in formats beyond stapled 8.5-by-11 pages or intimidating textbooks.

To that end, I’ve assigned not only individual stories in print and online as well as single-author collections, but also, increasingly, literary magazines. Two ways to do this are the Community of Literary Magazine and Presses (CLMP)’s Lit Mag Adoption program, which offers a discount on literary magazine subscriptions, and Journal of the Month, which sends a different magazine each month (available for both course adoption and individual subscribers). Both programs also offer the option for students to videoconference with literary magazine editors.

It was through the Journal of the Month program that I most recently taught work from AGNI, along with three other magazines. I was initially nervous about receiving the issues only slightly before my students did; I wasn’t looking forward to hurriedly reading the magazines, selecting readings, pairing them up with relevant craft essays, and then reading the selected stories again more carefully to craft discussion questions and writing exercises. This was, indeed, time-consuming, and I’ve since moved away from selecting all the readings on my own, although I’ve continued pairing stories with craft essays and exercises. Instead, I often ask students to take a preliminary look at first paragraphs or pages and nominate the stories that most intrigue them. This creates an automatic framework for subsequent conversation, as we discuss what drew them to different pieces and what assumptions they made or hopes they had and how the authors then met or diverged from those expectations.

These conversations can slip precariously into a catalogue of dissatisfactions, ways readers thought the work failed to meet the promises of the first pages, or into heated disagreement, with other readers defending the author’s decisions. But even grumbling has often signified that the work, produced by writers who are nearer to being their peers, is alive to them in ways some of their other readings aren’t. Students go from not always knowing what a literary journal is, to understanding it as the product of real labor and real decisions by a group of people with an artistic and editorial vision: each story is the end result of a series of deliberate choices made not only by the writer who wrote, revised, and submitted the work, but by the people who made editorial, layout, and design decisions. I’ve heard discussions about tables of contents every bit as interesting as ones I’ve heard about particular stories.

That the number of people submitting work to literary magazines routinely outstrips the number of people actually reading them is a concern for anyone who cares about this corner of the literary ecosystem, and for anyone who cares about the short story form. In the classroom, even as I’ve thrown open the floodgates for students to produce fiction that isn’t short stories, I’ve tried to be more intentional and more persuasive about communicating why they might want to. In both their reading and their writing, I hope they come to see the short story as a living art, not as either training wheels or fossils. At least some of them do. A few of them have even subscribed to literary magazines. 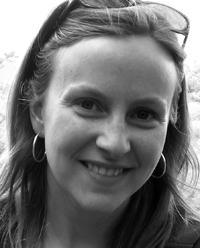 Caitlin Horrocks is the author of novel The Vexations (Little, Brown, 2019) and the story collection This Is Not Your City (Sarabande Books, 2011). Her work has appeared in The New Yorker, The Best American Short Stories, AGNI, The PEN/O. Henry Prize Stories, The Pushcart Prize, The Paris Review, Tin House, One Story, and elsewhere. She lives in Grand Rapids, Michigan, and teaches at Grand Valley State University and the MFA Program for Writers at Warren Wilson College. (updated 7/2019)