For years I taught at a technical university, where all the real money for teaching and faculty recruitment went to the sciences, the engineering schools, the agricultural program, and then, like Oliver Twist’s bowl of gruel, a little bit for the humanities. The school was Texas A&M University, a fine house of learning with many excellent teachers and devoted students. I had no quarrel with its reputation or its massive federal grants for research in all manner of needed solutions to our lives. I once made the observation to some colleagues that our school was uniquely dedicated to deal with hunger, wild fires, epidemics, animal diseases, and pets. We had one of the best veterinary schools in the country; we had Norman Borlaug, the inventor of semi-dwarf wheat that saved India from starvation, and continues to feed arid countries in Africa. That was A&M, a fortress armed against the disasters of nature.

When asked at a cocktail party or a public lecture what I did on the campus, I always faced the same look of disappointment or confusion. “I’m an English Professor,” I would say. How English could possibly contribute to the stern rules of nature was beyond almost everyone. You measured, you weighed, you whirled things on the cyclotron, or hung them up on wires to watch how metabolism worked in a cockroach. I played jazz with a bass saxophonist who specialized in cockroach digestion. He was wonderful, British born, with twenty postdocs following him around his suite of labs like so many ducklings. He was short-listed for the Nobel in chemistry, but I haven’t heard if he ever received it.

On my first day of class, I would tell my students we were starting on a journey into the imagination, into the murky, secret corridors of human feeling, and the even more arcane depths of myth and symbol. The groans were audible; the boys especially seemed nervous and looked around at the girls, who were clearly in the majority. The girls were happy, and were already writing stuff down into their notebooks. The boys were going to stonewall me; they felt threatened, intimidated, disenfranchised by the subject matter, which had so little to do with logic and its myriad integers and connections. That was their pride, their source of strength, their armor against a world that might deceive them with tricks and intuition. I was used to their grim faces at first.

The weeks went by and the poems and stories they wrote were, for the most part, adamantly literal. They had no idea how to access this organ called the imagination. They might have applauded vigorously Hugh Kenner’s assertion that imagination was essentially empirical, and that art was based almost exclusively on experience! Modernism was the temple of empirical art, and everyone was a realist, a critic, a satirist of the actual world. When the postmodernists came along, dreams and fantasies were included in their esthetic, which made the new poetry and fiction seem almost impenetrable as forms of communication.

But I believed in dreams and myths, in the power of mind to combine the real and imaginary in a single work. So on we plunged toward boundaries of awareness, and each student struggled to justify a use of language that did not “prove” anything, except to say that other realities existed. I couldn’t convert everyone to my premise that language was a house of many worlds, but curiously, science fiction was very popular and I could use it as a reference to some of my most rigid engineers. Little by little, something else occurred in class—students began to enjoy this other mode of consciousness. It was like discovering a path in the woods that led nowhere but deeper into the trees. To make things up was liberating; it wasn’t like lying, which had a specific purpose. It was lying to amuse, to entertain, to drift out of the mundane world into miracles. Even if they couldn’t let themselves go fully, they saw the freedom of beginning a poem by saying, “I died, and rose out of my bed/ in the dark of night,/ and floated among the stars.” Others would sit and think about the language, whether it was wordy, or not vivid enough. Not whether such a statement was fact. It wasn’t.

We read Borges, and Neruda, Donald Barthelme, and snippets of Homer, Dante, Richard Brautigan, Kurt Vonnegut, Emily Dickinson, Gogol, Kafka, Plath and Sexton. The more we talked, the more we seemed willing to believe in the world constructed out of such prose. There was a vast library of alternative realities out there, which most had never discovered before my class. They came to writing with high standards of accuracy and verifiability, but it turned into something different, a carefully constructed and plausible non-reality.

It made the facts of their other classes all the more curious and wonderful. A professor would lean over a lab bench and say that the solution was too rich or lean, or that the weight scale was off by a fraction of a gram. A math problem had slipped a cog deep in the intricacies of an equation, which made the whole argument false. A history professor dismissed an exam response of one of my students by calling it a willing fabrication of actual events. But it was only the date that was off, by a hundred years. In other words, students discovered that reality was a surface, an exact plane of calculations and facts, any of which broke the surface and revealed an ocean of oddities and wonders underneath.

Of course, they went back to the real world again after having me for a semester and left me alone with my alembics and coned hat sewn with stars. My robes trailed the ground of the classroom where I pondered strange mysteries and paradoxes. But some who had known me for such a brief time decided to become writers, to enter that secret garden of errant realities for good. My colleagues in creative writing were a kind of Hogwarts tucked in among the Lockean temples of absolute truth. We offered Piranesi’s staircases in place of Euclid’s ladders. And they restored the echoing past of the 17th century to the mind of the 21st. 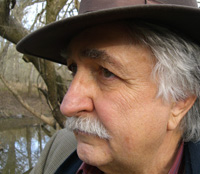 Paul Christensen has published eight collections of poems, most recently The Human Condition (Wings Press) and The Jack of Diamonds Is a Hard Card to Play (Lamar University Press). He has published essays and stories in Southwest Review, The Antioch Review, The Madison Review, Sulfur, and other journals. His poems have appeared in many reviews here and abroad. He is a former NEA fellow in poetry and winner of The Antioch Review’s first Distinguished Prose Award. He lives in central Vermont. (updated 2018)