I have returned to the United States from a study abroad trip in Spain where once again I read The Odyssey with my students. I often have students in my classes who are fraternity or sorority members. They call themselves Greeks, but most of them know little of Greek society or culture. This is your chance, I tell them. Let’s get to know what this Greek thing is all about. One of our sorority members in this study abroad class proclaimed she knew the Greek alphabet. It’s a start, I suppose. But the classics impact our lives more than we might think. Of the primary themes I tend to focus on, hospitality and the guest/host relationship come up nearly every day in our conversations. After the Trojan War, having been away for nearly twenty years, Odysseus is trying to return home. His story is constructed of one travel adventure after another. The ancient bards who recited the Homeric poems, literally singing for their room and board, had good reason to be concerned with the treatment of travelers. It is no coincidence that these poems again and again lay out the way in which a stranger should be received safely and generously on his journeys. We ask ourselves how are Odysseus and Telemachus treated as travelers, and how does this guest/host relationship work? We come to understand that guest and _host_are two sides of a coin, as even the words themselves come from the same root. Meaning: souls: ghosts or at least someone inhabited by one.

Now I’m in Taos, New Mexico, for the summer, and I am reading Virgil’s Aeneid for the first time in twenty years. Just a few decades before Jesus brought his good news, Virgil was finishing his great epic. Aeneas is traveling, but his wanders have a different impetus than Odysseus’s. “Wars and a man I sing” begins Fagles’s translation. Aeneas’s betrayal of the passionate Dido in pursuit of his duty to found the Roman Empire is less interesting to me than Odysseus’s desire to get home to his family. Aeneas is not as interesting or complicated a man as Odysseus. But Aeneas has no home to go back to, so that’s not an option for him. He can’t afford to be as complex, driven by the Fates as he is. He has familial duties to fulfill (his son before him and his father on his back) that are vaguely and precisely forecast in all kinds of signs, omens, prophecies, artwork he doesn’t understand, and mere high hopes of being his own man. People in his way will have to die or be overcome.

Besides re-reading The Aeneid and a few other books, I’m trying to write some poems, hike (though they just closed the forests until further notice due to severe drought), and spend time with my family. The other day we dropped our kids off at a place called High Altitude for open gym, and my wife and I had a lunch-date. Looking up at me from her sandwich, she suggested I not wear my Texas Tech baseball cap. It took me a second, and then it dawned on me. Rosy-fingered dawn. Some of our TTU Greeks (namely, the head of our interfraternity council, codename Cocaine Cowboy!) just made national news when they were exposed for their racist social media posts having to do with shooting Mexicans on the border for sport. They were just joking, they claim, but their fear and intolerance of strangers, their racism, lurks beneath the surface of their tasteless and menacing insults.

While the misogyny and violent nationalism inherent in The Odyssey and The Aeneid are apparent to a modern reader, the heroes’ finer qualities can teach us a few things about noble behavior if not plain manners. And though I live in the Bible belt, it seems lost on so many of my fellow citizens that, around three dozen times, the Torah suggests to God’s people that they should not oppress or vex a stranger, “as you were once strangers in the land of Egypt.” And everyone knows that the teachings of Jesus command and teach how to love thy neighbor and even enemy. A few decades after Jesus’ ministry, Hebrews 13:2 instructs: “Be not forgetful to entertain strangers: for thereby some have entertained angels unawares.” In both The Aeneid and The Odyssey, we see Aeneas and Odysseus in disguise, and how they are treated by their unwitting hosts during these visits provides the reader with great dramatic irony. It’s a thrill to open up these classical texts to discover with the students the best and the worst of who we might be, and all the complexities, beauty, comedy, romance, and tragedy in between.

Reading about these persecuted hero-wanderers and their troops, one might consider the plight of migrants all over the globe, even the Latinos in our own backyard, looking for a better life in this world of extremities. Due to irrational fear of the stranger and Rumor and Discord (see The Aeneid), many Americans hunker down into a defensive patriotism and exclusive nationalism, when many of our own families are made up of immigrants who were at one point persecuted, exiled, or just looking for a better life. We’d have the Statue of Liberty hold a sword against the air rather than a torch to light the way to shore. This summer, our Supreme Court held up an immigration ban that anyone can see is based on religious difference.

One of the final lessons of The Aeneid is that human violence rages unending. The Odyssey ends with a kind of peace, but that’s only because the gods tire of the bloodshed and descend (deus ex machina) to stop it themselves by making the Ithakans oblivious. I teach my students that the failure of language often results in violence. The inability to describe, develop pathos, realize complexities (of language and life), or negotiate leaves a vacuum that physical might tries to fill. How awfully ironic that the recent American epidemic of gun violence has been aimed at our schools. I am against the increase of armed guards in our places of education because I know that the antidote to violence is more fluent practice of language, not weaponry. Violence is costly. The Iraq/Afghanistan conflicts (we can’t even legitimately call these wars because of our spineless politicians) have cost close to three trillion dollars and hundreds of thousands of lives, millions of maimed bodies and broken souls, much more if you consider how all this has spilled over into Syria. The gods of Lockheed Martin, Boeing, Raytheon, and Halliburton preside, sometimes competing among themselves as in ancient times, and they call it good. Their less-than-fleet-footed messenger with the winged-hair and fake tan, our flag in his lapel, daily tweets us the bad news from on high. I shouldn’t insult Hermes, the Thief, by comparison. The new gospel we are hearing from Mount Pentagon via the White House is less than theological. It’s not poetry. It is not even good grammar. When I think of mythic leaders, I am reminded how far our President is from being a man who knows war firsthand (bone spurs) or one who could understand poetry. Not that these days anyone sane wants a man of war, mind you. Our representative man of war, our current commander-in-chief, tweets his empty threats almost daily against other national leaders and the free press. Trash-talking is an art, and one might look to the Aeneid, if only for this instruction. I should mention that of his military deferments, only one was for bone spurs, and four were for education. The irony.

At the end of The Aeneid, after their epic one-on-one battle, Turnus finally reaches for the words of peace, but it is too late for mercy. Aeneas’s final move is sometimes characterized as savage, but the way I see it, Turnus could not possibly be trusted. Forgiven perhaps, but not trusted. Maybe this scenario of Aeneas achieving his wrath finally can teach us something. There is no hope for any of us if we ultimately live quid pro quo. As I mentioned earlier, hard on the heels of Virgil’s epic, a radically different hero emerges in world history, and His epic is told by a host of unlikely writers in a collection of stories called gospels. Like the heroes of The Aeneid and The Odyssey (or more recently in The Sopranos or Breaking Bad), the actions of the central protagonist are for the purposes of safeguarding both a nuclear family (in his case, a group of disciples) and a larger kingdom rooted in nonviolent revolution. If you don’t know the other epics, you might not understand the radical nature of the New Testament story that would, as Luke said in The Acts of the Apostles, “turn the world upside down.” If you don’t know these stories that have lasted the longest, your first reaction might be to fear a stranger rather than to see in him or her a soul and a destiny. 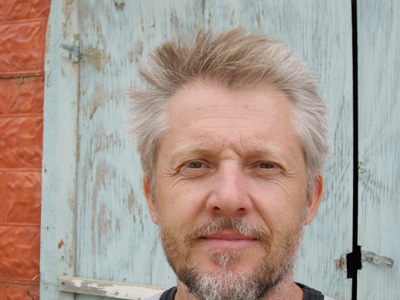 John Poch is the author of two collections of poetry and also served as the editor of the anthology Hockey Haiku: The Essential Collection (St. Martin’s Griffin, 2006). His most recent book is Dolls (Orchises Press, 2009). He was the editor of the literary journal 32 Poems for ten years, and currently teaches in the creative writing program at Texas Tech University. (updated 4/2012)