I’ve been rereading Virginia Woolf’s Mrs. Dalloway. The book jumped out at me a few days ago when I was dusting behind my makeshift library—a task I’ve been meaning to get to for years. Something about the story felt right. The shadow of death in that post-influenza, post-war era. The pervasive loneliness, even as the characters interact and prepare for what is now unthinkable: a party.

Reading about a party during a pandemic is like watching baking shows while working out (which I also do—or used to, before the Y closed). It feels indulgent and slightly torturous. I keep wanting to tell the characters to step back.

But while they might not stand six feet apart, the characters do practice a form of social distancing by failing to connect. Nearly everyone mourns their isolation and the loss of happier times.

Early in the novel, Rezia Warren Smith tries to tell her shell-shocked husband about the lively Milan gardens of her past, but her words fade like rocket sparks over a city at night, briefly illuminating “the trouble and suspense of things conglomerated there in the darkness; huddled together in the darkness . . . I am alone; I am alone! she cried.”

Similarly, Peter Walsh fondly remembers riding a bus with Clarissa around London and noting “the feeling they had of dissatisfaction; not knowing people; not being known.” He recalls Clarissa’s belief that after death “the unseen part of us, which spreads wide, the unseen might survive, be recovered somehow attached to this person or that, or even haunting certain places.”

I think about these passages in the early morning hours, when I write before the rest of the family wakes up. From my window, the sun rises over the rooftops along the street behind ours—unseen in all those dark houses, sheltering so many people I don’t know. Last summer we learned we’d been referring to our backyard neighbor by the wrong name for nearly a decade. She and her husband recently moved, but they didn’t tell us; we found out when the family who took their place stopped by to introduce themselves and announce a plan for a taller fence between our yards. “Nothing personal!” they said cheerily. So far my view remains unobstructed, and I feel a kind of relief when their kitchen light begins to glow each morning.

It’s not just the unseen parts of us that cling to others, of course. In the novel, when Lady Bruton’s friends leave her house, “they [go] further and further from her, being attached to her by a thin thread (since they had lunched with her) which would stretch and stretch, get thinner and thinner as they walked across London; as if one’s friends were attached to one’s body, after lunching with them, by a thin thread, which (as she dozed there) became hazy with the sound of bells, striking the hour or ringing to service, as a single spider’s thread is blotted with rain-drops, and, burdened, sags down. So she slept.”

Our threads stretch thin—so very thin—during this period of quarantine, all of us resurfacing in each other’s thoughts just as phrases repeat in the minds of Woolf’s characters. And the notion of anyone attaching to one’s body makes us both squeamish and nostalgic. We keep our distance, and our connections grow hazier. We phone and videoconference, seeing each other only through virtual windows. We try to use our time and technology to break through the fog of what was formerly unseen and unknown about those dearest to us. To be more open with each other, more available for conversation, and ultimately more connected.

Two of Woolf’s lines feel apt beyond the rest. As Peter Walsh watches an ambulance make its way through the streets, he thinks, “It is the privilege of loneliness; in privacy one may do as one chooses. One might weep if no one saw.” Loneliness is definitely a privilege; the only reason I’m able to stay home is because my job allows for it. I’ve shed tears of gratitude for this, and for those whose work takes them to hospitals and grocery stores every day. An ambulance has passed along our street too, transporting neighbors—ones we know very well—to the hospital for problems unrelated to the virus. I hold my breath as the flashing lights retreat, my thin thread attached to those inside.

The other comes near the end of the novel, when Clarissa learns of Septimus Warren Smith’s suicide: “Oh! thought Clarissa, in the middle of my party, here’s death, she thought.” Yes. That’s exactly what we’re up against. We are not ready for it, neither individually nor as a country.

During her happy days long ago at Bourton, Clarissa often left her group of friends “to look at the sky,” she remembers. So she leaves her own party for a few minutes, as we have left our social circles, to look upward and outward at a woman in another window, getting ready for bed—just as I sit at my window, watching the family in the house behind ours begin yet another day of isolation. Clarissa thinks of Septimus, like all of us thinking of those who have died, and knows “she must go back. She must assemble” with her guests. And someday, eventually, we will, too. We will re-enter the timid world like Clarissa rejoining her nearly empty party. We will count ourselves, as we have in the census. And we will feel terror and ecstasy and excitement, like Peter Walsh watching Clarissa enter the room. “For there she was”—just as, hopefully, you and I will be. 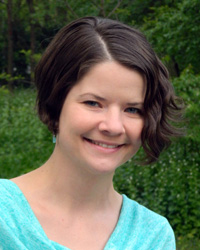 Jenn Hollmeyer is the author of the story collection Orders of Protection (University of North Texas Press, 2019), which won the Katherine Anne Porter Prize in Short Fiction. She was a finalist for the 2015 Prairie Schooner Book Prize. Her stories and essays have appeared in AGNI Online, Shenandoah, West Branch Wired, Post Road, Salamander, Meridian, and elsewhere. A founding editor of Fifth Wednesday Journal, she lives in the Chicago area. Read more at jennhollmeyer.com. (updated 6/2020)