A stump endures beneath the floor of my screened porch in Tampa, Florida—of an oak cut down when this row of bungalows was put up nearly a century ago. I didn’t learn of it until last year, when David, the pest control man, crawled there and soaked it with creosote and other poisons to beat back the termites whose vast galleries rummage far below this old end of town. The stump and termite join my growing roster of tutors on the topic of how much lies unknown so near beside, above, within—and after only twenty-five years writing out here on this porch, en plein air, at some hour nearly every day. Twenty-five years I didn’t intend, really, with the ospreys cruising up from the pond adjacent to the expressway…and the anoles—migrants from the Caribbean in the 1930s—dashing across the sidewalks, always in the same direction, from the street-side grass to the interior lawn…and the white powdery noonday light of midsummer…and the rainy season making our street a gondola-road each afternoon, the run-off sluicing from roofs as though the tiles were melting. Decades gone from my first home-place in Iowa (all changed now but in a few minds) I have become a native of this porch. And like the prose I love and strive to emulate, it has become an instrument of awareness, observation, contact, a layering of memory and artifact. It’s become a point through which ever more accumulating lines pass concurrently. Take that temporary meadow across the street, for instance, blooming scruffy and spiny white behind the sign with townhouse illustration announcing Lux City Living (starting in the $600k). A year ago a Spanish Med stood there—built the same year as our house. Dissipated Ambler lived in it; before him, Derrick and David (who sold children’s clothes on the net) and before them, Emily and her piano tuner boyfriend. And others. Others all around. They lived in it, in what has vanished. They will also live in the vanishing to come. It’s the only fact left to them, of them. How can that be? Yet another tutor about the near and nearly unknown, Robert Francis, in his great poem “Juniper,” gets at the luck in it. Of the berry of that tree, he writes:

Its colors are the metals: tarnished bronze
And copper, violet of tarnished silver,
And if you turn it, white aluminum.
So many colors in so dull a green
And I so many years before I saw them.

I see those colors now, and far, far more
Than color. I see all that we have in common
Here where we live together on this hill.
And what I hope for is for more in common. 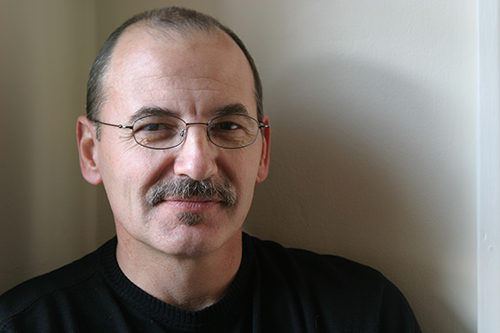 Donald Morrill is the author of four books of nonfiction and three volumes of poetry, including Awaiting Your Impossibilities (Anhinga Press, 2015), which won the Florida Book Award. His debut novel, Beaut, won the Lee Smith Fiction Prize and was published earlier this year by Blair. He teaches in the low-residency MFA at the University of Tampa. (updated 10/2018)