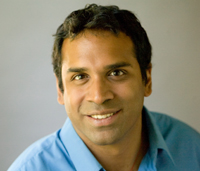 Ravi Shankar is the author, editor, or translator of over a dozen books, including most recently The Golden Shovel: New Poems Honoring Gwendolyn Brooks (University of Arkansas Press, 2017) and Andal: The Autobiography of a Goddess (Zubaan Books/University of Chicago Press, 2016). Winner of a Pushcart Prize and a Glenna Luschei Award from Prairie Schooner, he has appeared on NPR, PBS, and the BBC. He founded Drunken Boat, one of the world’s oldest electronic journals of the arts, and teaches and performs around the world, most recently for the New York Writers Workshop and as writer-in-residence at Sun Yat-sen University in Guangzhou, China. He has published a book of poems, Instrumentality (Cherry Grove), a finalist for the 2005 Connecticut Book Awards; two chapbooks, Voluptuous Bristle (Finishing Line) and Seamless Matter (Rain Taxi), featuring the artwork of late American artist Sol LeWitt; and with Reb Livingston, the collaborative chapbook Wanton Textiles (No Tell Books, 2006). He is currently on the faculty of the Stonecoast Writing Conference and the first international MFA program at City University of Hong Kong. He serves on the Advisory Council of the Connecticut Center for the Book, and, along with Tina Chang and Nathalie Handal, edited Language for a New Century: Contemporary Poetry from Asia, the Middle East & Beyond (W.W. Norton & Co.), called “a beautiful achievement for world literature,” by Nobel laureate Nadine Gordimer. He does not play the sitar. (updated 10/2017)

Shankar’s AGNI poem “Barter” won a Pushcart Prize and is reprinted in the 2011 anthology.