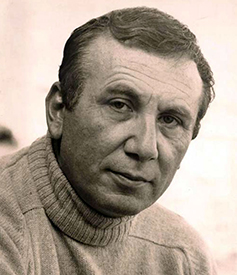 Nizar Qabbani (1923–1998) is arguably the Arab world’s greatest love poet and critic of Arab political and cultural traditions, particularly those that oppress women. A career diplomat, he served in Syrian embassies in Egypt, Turkey, Lebanon, Britain, China, and Spain. He lived his latter days in London, having been expelled by many Arabic governments for criticism voiced in poetry that people adored, memorized, and often set to music. In more than thirty-five books, he helped establish the idioms of modern Arabic poetry using the rhythms and language of everyday Syrian speech.

Poetry
Bread, Hashish, and the Moon
By Nizar Qabbani
Translated from the Arabic by Rana Bitar and Robert Bensen
Poetry
AGNI 94 Print Only
Back to top