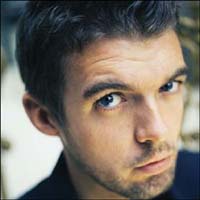 Nick Laird is a lawyer, poet, novelist, and critic, born in 1975 in County Tyrone, Northern Ireland. His essays, reviews, and poems have appeared in various journals in Britain and America, including The London Review of Books, The Times Literary Supplement, The Guardian, The London Times, The Daily Telegraph, AGNI, The Believer, New Writing 11, and New Writing 13.

His debut collection of poetry, To A Fault, and his first novel, Utterly Monkey, were published in 2005. To A Fault was shortlisted for the 2005 Forward Poetry Prize for Best First Collection, and Utterly Monkey for a 2006 Commonwealth Writers Prize. His second collection of poetry is On Purpose (2007), winner of a 2008 Somerset Maugham Award. He has also received the Ireland Chair of Poetry
prize, the Betty Trask Prize, and the Rooney Prize for Irish Literature.

Laird, who has lived in Warsaw and Boston, now lives in London, where he is at work on a second novel, Glover’s Mistake, due for publication in 2009. (updated 10/2008)