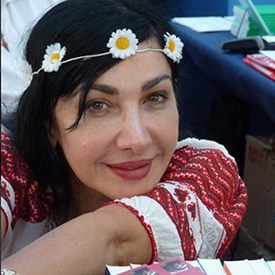 Maram Al-Masri, considered to be one of the most influential and captivating voices of her generation writing in French and Arabic, was born in Latakia, Syria, and moved to France after her university years. She is the author of fifteen poetry collections, including Je te regarde, Cerise rouge sur un carrelage blanc, and Le retour de Walada, and editor of two anthologies, including Femmes poètes du monde arabe. She has received, among other awards, the Prix d’Automne 2007 de Poésie de la Société des Gens De Lettres and the Dante Alighieri Prize. She has been named ambassadrice du Secours populaire. (updated 10/2021)