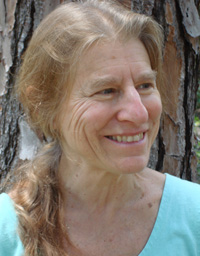 Joan Michelson, originally from Boston, lives in London. She has published a collection of poetry, Toward the Heliopause (Poetic Matrix Publishers, 2011), as well as prose and poems in the British Council’s annual anthologies of New Writing. She has received writing fellowships from the MacDowell Colony, the Djerassi Foundation, and the Virginia Center for the Creative Arts. She has also won the 2011–2012 Year Members Prize from the Poetry Society of England and is currently the Poet Laureate of Thornton’s Budgens, London. Michelson was former Head of Creative Writing at University of Wolverhampton and is now lecturer in poetry at Birkbeck College, University of London. (updated 8/2012)