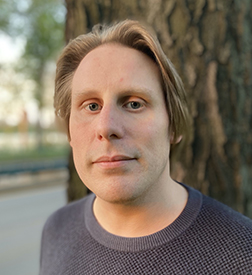 James Brookes introduces AGNI’s newsletters and has been part of the editorial team since 2021.  A poet from Sussex, England, he received an Eric Gregory Award in 2009 and a Hawthornden Fellowship in 2010. His first collection of poems, Sins of the Leopard (Salt, 2012), was shortlisted for the Dylan Thomas Prize. His second collection, Spoils, was published by Offord Road Books in 2018. He received his MFA from Boston University, where he was awarded the Academy of American Poets Prize and a Robert Fitzgerald Prize for literary translation. (updated 3/2022)