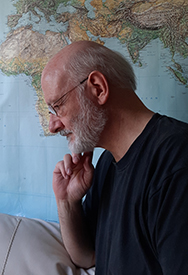 Iain Galbraith is a poet and essayist whose most recent publications include a volume of poems, The True Height of the Ear (Arc, 2018), and translations of Esther Dischereit’s Sometimes a Single Leaf: Selected Poems (Arc, 2020) and Reinhard Jirgl’s novel The Unfinished (Seagull, 2020). He has received several prizes for his work, including the Stephen Spender Prize (2014), the Popescu Prize for European Poetry Translation (2015), and the Schlegel-Tieck Prize in 2016 for Jan Wagner’s Self-portrait with a Swarm of Bees: Selected Poems (Arc), and again in 2019 for Esther Kinsky’s prose work River (Fitzcarraldo). He was born and grew up in the West of Scotland and lives in Wiesbaden, Germany. (updated 10/2020)