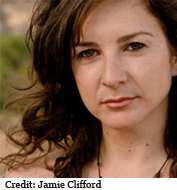 Elana Bell is featured in AGNI‘s Emerging Poets Interview Series. Her first collection of poetry, Eyes, Stones, was chosen by Fanny Howe for the 2011 Walt Whitman Award and published by Louisiana State University Press in 2012. Her work has appeared in_ Harvard Review_, AGNI, Massachusetts Review, CALYX Journal, and elsewhere. She has led creative writing workshops for women in prison, for educators, for high school students in Israel, Palestine, and throughout the five boroughs of New York City, as well as for the pioneering peace building and leadership organization Seeds of Peace. She is writer-in-residence at the Bronx Academy of Letters and poetry editor of Jewish Journal. She lives in Brooklyn and can be found at www.elanabell.com. (updated 1/2013)

Read “Living on That Land: A Conversation with Elana Bell” by Eric Higgins in AGNI Online.