The optical is topical for Heather McHugh not just because of the anagram, but because her latest poetry collection, Eyeshot, refuses to believe what it is seeing. A significant trail of optically influenced titles from McHugh’s 1994 National Book Award-nominated Hinge and Sign (“Spectacles,” “Orbit,” “Pupil,” “To See the Light,” and “20/200 on a 747”) inform this work and perhaps serve as the series of visions against which her latest work may be called a revision. In Hinge & Sign’s “Message at Sunset to Bishop Berkeley,” after all, McHugh told the philosopher (whose eyelid closed the sky) that sunsets were really something. Were those just sweet nothings? Has vision become suddenly unsightly?

McHugh has long harbored a slight distrust of vision, partly because of its dependence on shifting vantage points. The last poem in Hinge & Sign, “From 20,000 Feet” notices similarities between cloud formations and banks of rock, arguing that the underlying nature of the world might be “likeness / everywhere disguised / by wavelength, amplitude and frequency.” The phrases “from here” and “from there” not only give structure to this masterful poem, but they could also frame a large portion of her oeuvre. McHugh often has us seeing double, and her signature puns are inherently stereoscopic: from here a pupil is a student, from there a pupil is an opening. It seems that McHugh is continuously giving herself a vision test, even when it means discovering what differing takes on vision she has.

“Sight makes noise,” McHugh asserts in Eyeshot. “It sponsors far / too much detail.” This time she’s got her eye on a hanged man’s untimely erection, “holding sway / against the notion / only good can come.” She’s watching the “Fourth of July, B.C.”—British Columbia, at first, though shades of millennia past do emerge as she considers ironic the frosty imperturbability of mountains, given the volcanic heat and motion at their geological roots. And, small-time fireworks aside, how important are the borders between nations when set against such a world? Again, the angle from which a subject is approached becomes the subject.

Or consider this poem from Eyeshot, titled “Out of Eyeshot,” in which McHugh examines the way tears deranged her visual sensibilities as a younger poet:

Years I poured it forth, without
a thought. To left and right

I sprayed the wide world’s
spectacle. I made a blue

bird sparkle, and a red tree;
phones rang under my auspices,

then an ocean, buckling by the
bucketful: its whole ferocity

Her tears become pellet-like projectiles as the poem progresses, and we realize the eyeshot she is talking about—cleverly forged in the manner of birdshot and buckshot—is a way to dismantle the visibly unified, to “blow / coherencies to rainbows.” To see the world through tears is to see a changed world, blurring (in fierce first-person style) the big picture. This word-warped, disjointed vision has always been good target practice for McHugh; we know it’s her aim, and we know she’s a good shot. What makes this poem work is the self-critical cease-fire she calls in its final lines. The poet has no more tears to waste, and she closes without ever uncocking the conceit: “I cannot weep. I keep / my head. I do not make a scene.”

Earshot is under the microscope too. Look what happens when her glance falls on a cataloguer at the Audubon Society whose list of birdcalls (rendered into English) read like a desperate litany of displacement. Take the chachalaca: “its females were quoted to cry ‘Keep it up!’—and its males to reply ‘Cut it out.’” McHugh’s knack is to distract us with a background of witty audio-visual chatter before we ever notice she’s taking a bead. She could be Audubon crouching in a blind herself.

She does a few bard-calls in this collection as well, translating T’ang Dynasty masters, Baudelaire and Borges among others, selections consistent in content and sentiment with her theme. (One might even say these poems are imitations, as Lowell employed the word. Recall that McHugh was for a time his student.) If Li Bai looks a little McHughified on the page in phrases like “a whirling world away,” it might be that the poet is simply confirming her suspicions about first-person interference—which never held Lowell back either. And, after all, it’s those bizarre linguistic tics that have given her one of the most distinct voices in American poetry.

The page might swim as you stare into these dizzying lines, but McHugh knows the human sense of balance resides in the ear. You might have to say aloud a line or two like “and men are scattered / into manyness again” before you grasp all its possibilities. One of her favorite devices is the oddly divided word, which allows meaning to come together in the reader’s mind (“cide with a coin” eventually coincides, “res for res, ponding for cueing” eventually responds and rescues). This time-release formula is withholding at its finest, as in her “Lectator’s Song” where she denies the poem the prefix de- that would decipher its title but destroy its penultimate punch: “O sires, o cadences!”

McHugh’s skill, of course, is exposing moments of compromised vision, asking us to return to what we think we saw, and where we think we saw it. The poet’s continuing lyrical dilemma is the difficulty of making sense of our senses, making peace with our pieces, and this book may be her clearest outpouring of earnest doubt yet. A unifying vision is impossible because each of her eyes is focused separately on one of two suspicions: “on the one hand that in all the scheme of things we matter/ marvelously little; on the other, that we are / the scheme of things.”

Kevin McFadden, originally from the Cleveland area, was a Henry Hoyns Fellow at the University of Virginia and is currently the Associate Program Director of the Virginia Festival of the Book. His poems have appeared in Poetry, Fence, American Letters & Commentary, and Quarterly West; his poetry reviews have appeared in Meridian and Virginia Quarterly Review. (11/2003) 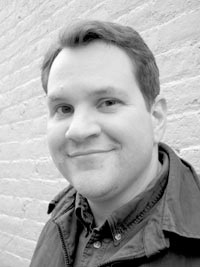 Kevin McFadden is the author of Hardscrabble, an inaugural selection of the VQR Poetry Series (University of Georgia Press, 2008). Winner of the Fellowship of Southern Writers George Garrett Award and the Erskine J. Poetry Prize, he has had poems appear in Poetry, American Letters & Commentary, Denver Quarterly, Fence and The Antioch Review. McFadden is currently the Chief Operating Officer of the Virginia Foundation for the Humanities. (updated 10/2009)