style, v. 5. To pierce with a stylet.
style, n. 1.b. Used as a weapon of offence, for stabbing, etc.
(from The Oxford English Dictionary)

Until you taste what failure is, you will
Never sing that pain style requires.

One dark morning earlier in this life,
I felt two hooded men approaching me

In an alley. One, or both, roundhoused me
From behind. I was carrying a blue

Guitar because I desired style then,
And thought it my gift to offer some.

Back then, I thought I knew what gifts were:
A voice, a song, combat boots, silver rings,

A blue guitar. But these two taught me
The true meaning of style as I came to

With asphalt on my tongue, a different
Kind of stars inside my eyes. They picked me

Up and leaned me against a wall. I spit
Blood and stones at their feet, but there were no

Poems inside that salt, nothing heroic.
One of them laughed while the other spit back

And removed a knife tucked between his boot
And shin. He brought it to his face, almost

In awe of it, as if allowed to
Hold it after a long apprenticeship.

The other laughed again, spit like his friend.
But neither said a word. This was their style:

Getting in and getting out with a slowness
Utterly fearless and without regret,

Like they had taken their own sweet, autumnal
Time knocking me down again and slashing

The flesh behind my knees with precision
And grace, like a painter, surgeon, or bear

Hunter skinning his warm kill. In this way,
They assured themselves a clean, calm exit.

But not before they removed the guitar
From its case. If they could see its clear blue

Didn’t let on until I groaned with all
The bitterness I could muster, You sons-

Uh-bitches, goddamned mother-fu…sons-uh…
To which the one with the knife replied, What

Did you say, the one and only direct
Question I’ve ever received in the slow,

Painful, confusing, and necessary
Discussion concerning itself with style. 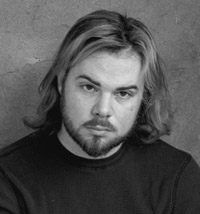