_       _ He was far from the farm boy growing up in Vermont’s dark Green Mountains;
a little old man living on a pittance in Stuyvesanttown,
mugged down the hall from his flat, like in some dark dingy fiction
with the overhead bulb flickering.
So when Alfredo de Palchi made the intro for me,
he was bent over; had lost all his hair.
His eyes out of focus.  How old age doesn’t slowly creep up
but suddenly there in those morning mirrors
we seek to avoid, except as some passing glance in shop windows;
out in the glare on your own
after the snow has subsided.
Far from the evening dusk.  Far from the grackles. 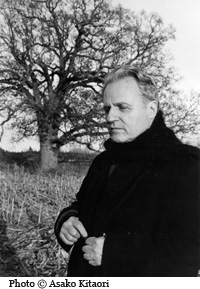 Gerard Malanga is an American poet, photographer, and filmmaker best known for his work with artist Andy Warhol. His latest book publications are AM: Archives Malanga, A 4-volume set of fanzines (Dagon James/Key Press, NYC), and Ghostly Berms, an exhibition catalogue published by In-Arco Gallery (Torino, Italy). He makes his home with four cats in a country retreat in upstate New York. His website is gerardmalanga.com. (updated 6/2013)