Yes, I have called bereavement most beautiful
sister, she who requires my song, who insists
even if I am bashful and the few guests
bored. Why is she not welcomed in finer homes?
She is as kind as a gentleman’s polished
mirror, white mistress of likenesses, as if
the heart were a field stiff with ice, as if
our griefs were the dire wolf who never feasts, who
lives only to scour these woods. As if the farms
blazed through snow, cold streets ran flaming with her voice.

How I love the rich,
who even in their fall from grace
are never graceless. (The count who wipes the cafe floors
honors even me
with his smooth court bow, and I’m told
he overtips on his night off.) Yes, you would prefer
me bitter, I think,
but that is a tone too cheaply
acquired for my taste, and hard to lose. When I wrote how
my daughter blistered
her fingers in making bonnets
and five francs a day, which served just to preserve us
in our cold attic,
in our usual state of slow
starvation, your applause was like the cries of angels
who see the fine shirts
burning on the backs of the damned.
I want no more of it. And when I did not visit
because my good shoes,
my only shoes, abandoned me
on the street outside your house, my apology read
like those bad novels
of Dostoevsky’s, volumes stocked
with fools who believe their precious lodgings in heaven
are paid for in full
by the great sins of their neighbors
who owned, perhaps, an extra lamp or some china.
Let the covetous
have all they want, they still must live
in a world yawning with hunger. Let me remember
an old man who bows
because his pride requires it,
not the vanity of others. He owes us little else.

Sergei, I cannot
sleep. I must confess over
and over my one sin,
that I always desired you
less than I craved knowledge
of your forgiveness, my love,
our imperial road
where we met like two strangers
who bow once and pass by.
Oh, if we had joined hands there,
and gone on together
toward some rising mist, Japan,
some port where we’d forget
how all things fail: grand hotels,
their caviar and cream,
dwindling at last to a thin
potato broth, bad wine,
at a third rate village inn.
I knew no other man
who could forgive me the wise
clarity of my heart:
I found I could love you more,
More, in your absences,
and so I led my lovers
From my lips to my bed
just so they too would leave
and my nights would wither
except for this song, white priest
who blesses the marriage
of our distant, strange voices
into one long lament.
All the men I’ve loved are dead.
The sleek souls I gave them
leave no more shade than bare trees.
But you, you are the light
of winter, glare through the branches,
ice in the sky, all these
wonders which keep me awake.
Those songs I wrote were meant
for those who shiver at night,
who cannot sleep, as you
poor man, could never find rest.
Those songs are dead, and I
fear they will become your wreaths,
gifts of a wife who must
always come too late. Sergei,
in my insomnia,
I love you wholly...

1. I Have Heard The Wind

Yes, I have heard the wind call me bitter
even in spring, and have seen my name scrawled
in vacant margins of a long, gray sky.
And those sharp sprigs of the new wheat,
do you think I do not know at whom their fingers point?

There is a taste of dark tea, overbrewed,
the burnt crust of my tongue. There is a prayer
prayed in bitterness for those who vanish.
I have heard the wind fall silent.
Do you think I do not know a blessing when it comes?

Grandfather, I thought of you at prayer even
as I prayed because I could not love a god
who did not have your face. I think if I lived
again, I would be just a man who harvests
his own wheat, whose sabbaths are given to Christ,
who believes those torn, tender features are more
than just a likeness of his own sufferings.
An old, poor man who feels the presence of God
stirring his beard. Oh, it would be good
to be again a true believer. Not Marina,
the poet, who finds nothing left in this world . . .
But the quiet priest who leads the orthodox
as they kneel, those worn candles, sure of their light,
surer that they have everything to die for. 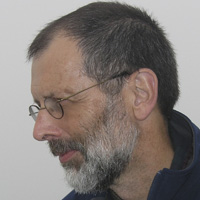 Jordan Smith is the author of seven books of poetry, most recently Clare’s Empire, a fantasia on the life and work of John Clare, available digitally from The Hydroelectric Press. He lives in upstate New York and teaches at Union College. (updated 10/2016)