Along the strip in Waikiki, past sailor bars
and clubs, the length of beach where lipstick
sunsets smudged and magazines would shoot
and caption, Paradise. Past posh hotels
where M. and I would wait for some nice man
to buy us drinks from the bar. We’d watch
the women walk like they were stars onstage,
dress like they couldn’t wait to be undressed,
leaning over into idling cars. Out on the west side
of the island, J. tells me any man she dates
is more likely to hit her than pay for her dinner.
Teenagers holding babies spit at us when we stare:
What you looking at? You got nothing.
I have nothing, sobs L., today, on the phone.
I know it isn’t my fault, but when I think of how I let him do it
over and over, even helped him cover it up, I hate myself.
I’m thinking of the man who owned the noodle shop,
the man who’d always sit with me and chat
about Hanoi, warm water in canals,
moms on bikes with babies tied down
front and back, how to tell a ripe papaya.
I saw him on the news a few years back,
for smuggling women in refrigerated trucks.
He owned the bar called Girls Girls Girls
a few doors down from where he served me pho,
the one whose sign was made of neon legs
that kicked and kicked until they were a stain of light.
We liked to swim along the south shore
when the tide was right. You had to time your dive
or crack your head against the reef. More than once
a girl washed up. Sometimes they named her
on the news. M. and I drank Kamikazes
on the lanai of the new Sheraton,
the chief of security coming out to check
we were the right sort of girls, regaling us
with stories of the wallets stolen off of businessmen
by ladies visiting their rooms, a theft
they’d later blame on the hotel maid.
I hate—L.’s voice, mine. When I think
of how I—how many times have I said it?
How many times have I said nothing at all
or tried to explain why we aren’t at home—
the right sort of girl and the wrong,
why we’re out under the orange street-lights. 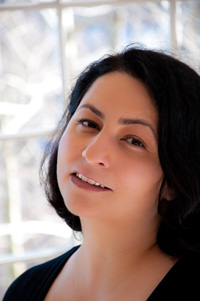 Kirun Kapur grew up in Hawaii and has since lived and worked in North America and South Asia. She is the winner of the Arts & Letters/Rumi Prize in Poetry and the Antivenom Prize for her first book, Visiting Indira Gandhi’s Palmist. Her work has appeared in AGNI, Poetry International, FIELD, Blackbird, and many other journals. She directs the Boston-area arts program The Tannery Series and is poetry editor at The Drum. Learn more at kirunkapur.com. (updated 2/2016)

Her poem “Girls Girls Girls,” originally published at AGNI Online, was selected for the 2015 Best of the Net anthology.