The admissions made by the men—who were given food whenever they were hungry as well as Starbucks coffee at the U.S. prison at Guantanamo Bay, Cuba—played a key role in the government’s decision to proceed with the prosecutions, military and law enforcement officials said.
—The Washington Post, February 12, 2008

The cup exotic in your same old hands, so warm,
almost normal after the night you had. Holding
a paper cup to your mouth, your poor
bleared eyes, your forehead, is American, our gesture.
What have you done? An empty table, a paper cup
of coffee. A small room filled with the knowledge of good,
of freshly ground. Wake up: in America we have
plenty. There’s coffee for everyone, even for you.
According to the Washington Post_, he was enticed_
with Starbucks coffee. Food when you asked for it,
all the coffee you could drink. We are American enough
to think, right off, of the ad we should make
for Starbucks: quick, cinematic cuts of a desert,
a middle-of-the-night rendition. Our brave soldiers in green
night vision—_GO! GO! GO!—_surprising you in your
spider hole. Then the flight: hooded you in a cavernous cargo
hold, circled by special ops, enormous guns. Cut back
to you dragged off the plane and past the barking dogs. Split
seconds of razor wire, bars, interrogation rooms. Gradual rise
of quiet, the calm of a _fait accompli_ed, then birdsong, the smell—not
smell, aroma—of good hot American coffee, $9.95
a pound. Your fat, hairy hands, cuffed to the table, wrapped
around the familiar paper cup, close up: benevolent
goddess, ring of night-vision green. Then a hush falls, hush
at the pivot of a nation, the center of a century’s legal thought’s
near undoing. And you weep, strain to hold the cup
to your sorry face, tell us everything we want to know. 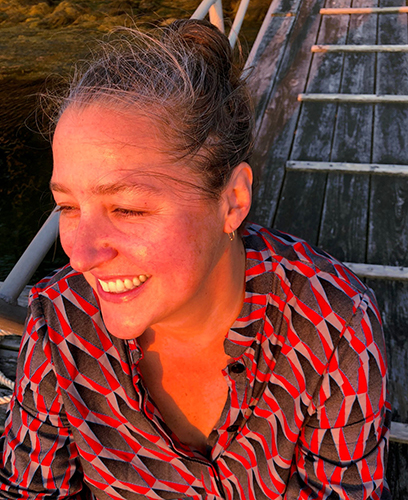 Jill McDonough is the author of five poetry collections, most recently Here All Night (Alice James Books, 2019). The winner of three Pushcart Prizes, she is a former Stegner Fellow and has received awards from the Lannan Foundation, the National Endowment for the Arts, and the Cullman Center. Her work has appeared in Poetry, Slate, The Threepenny Review, AGNI, The Best American Poetry, and elsewhere. She teaches in the MFA program at UMass Boston and and offers the course College Reading and Writing in a Boston jail. (updated 9/2019)