I visited here many years ago
and drank the deep honey and spleen
of exile—zealously playing chess,
or cards, with fate. I observed with care,
pretending to be Ovid in exile—
from the platform to the forbidden zone,
from the once sharp-eyed border station
to the troop of emptied homes.

The canal, where they fished out Rosa,
doesn’t reflect a band of ruins anymore.
Stations are reborn. Streets have shifted shape.
What hasn’t changed? Maybe you, yourself.
From within the boulevard, a pure light
shoots out like egg whites from a shell.
Above the embassies, colossal flags
of yesterday’s past fade away. Pariser Platz.

From the new parking lot and mini bar,
I observe the empty postmodern era.
By the bank—more sterile than the Sahara—
there is Gehry’s atrium like a well.
The bright threads of tracks lead the eye
to an intersection where the setting sun
splashes about and the Siegessåule pokes
the sky like an irrefutable negation.

The wall is gone. You can‘t even make out
where it loomed—where the black waters
of the river Styx once flowed. The kingdom
of consumption and sex can’t solve the riddle
even as the tourists tread all over its bed.
An avant-garde painter sells pictures
where the palace of the politburo once stood—
now slipped out of a country that is no more.

Like him, I am drunk in the fields of freedom.
I am anachronistic like a Huguenot,
but still alive, even though I speak in fog,
without felicity, meandering, disorderly,
having experienced the hot and cold,
often lost between basalt and granite,
standing by a faceless, swaying bridge
that has been pasted into the new time.

I don’t belong to it. Like this pediment:
shields, chariots, griffons and Hercules—
spilled into the present by a flood,
splashing with water (or fire more like it).
But while the awkward, dirty trophies
still face down the biting April wind,
the creator and destroyer of the Acropolis,
Pallas—my goddess—is still with me.

The human always seems to be new
in her realm where epochs change
as empires are ushered out with laughter,
and the charms of victory do not last.
In losing a fatherland, often also a name,
one learns solitude, loses the fear of poverty,
but (as the emigrant has said) one dives
into time like a salamander into fire.

And that may be the only enjoyment
in a land ruled by the word ohne.
Survive until the journey ends,
living in the fire. No one will help you.
Garbage pits are full of ideas—
and you, however worthless, still feared
slavery more than physical danger,
and untruth more than death.

An angel rises above the trees—whether good
or bad, you can’t know. It is too late
to meet him. Like the need for tact
and rules, fate needs to be thanked.
Until the stars will shine in a clearing,
I turn toward where the wall used to be
and disappear from the overstuffed windowpane,
having wiped off my reflection with a hand. 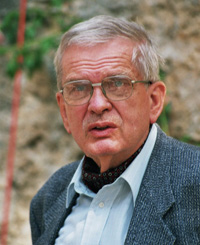 Tomas Venclova was born in Klaipeda, Lithuania, in 1937. Because of his outspoken membership in the Lithuanian Helsinki Group, which monitored Soviet violations of human rights, Venclova was threatened with sanctions and, in 1977, forced to emigrate. Since 1980 he has taught at Yale University. Collections of his poems have been published in English as Dialogue in Winter (1999) and The Junction: Selected Poems (2009), and he has won numerous awards, including the Lithuanian National Prize and the Prize of Two Nations, which he received jointly with Czesław Milosz. Venclova’s poetry has been translated into more than twenty languages. (updated 4/2013) 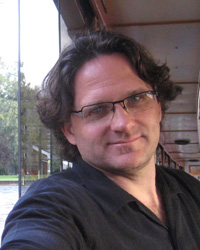 Rimas Uzgiris is a poet, translator, editor, and critic. His work has appeared in Barrow Street, Atlanta Review, Quiddity, AGNI, The Hudson Review, and elsewhere. He is translation editor and primary translator of How the Earth Carries Us: New Lithuanian Poets (Vilnius, 2015). The recipient of a Fulbright Scholar Grant and a National Endowment for the Arts Literature Translation Fellowship, he teaches literature, translation, and creative writing at Vilnius University. (updated 9/2015)
Read more about this translator
Share on Facebook
Share on Twitter
Print page
Follow AGNI on Twitter Follow AGNI on Facebook
Back to top