1.
Mythologies of the End

Each century believing itself poised as if on the edge of time.

2.
The Meaning of Impatience

Restlessness in time. To imagine that which is not swiftly accomplished will never be fulfilled.

Unable to initiate creation, or manage civilization: the drive to engineer decreation with perfection.

The division of the spirit between advancement and abandon.

5.
The Attraction of the Apocalypse

To control with absolute certainty one thing. And for it to be the last.

The intersection where civilization and perseverance meet.

7.
The Effort of Civilization

Miraculous labor. Each day Sisyphus rolling his rock uphill against the accidental nature of mankind.

To draw into question Sisyphus’s task.

Intellectual sleepwalking. The ethical self abdicating volition for the temptation of renunciation.

To reject contingencies of disaster. To glean possibility from the crevices of improbability.

Civilization’s estate for which there is no sovereign protection.

A type of grace: waiting in impatience to see that, from now until the far edge of always, nothing happens. 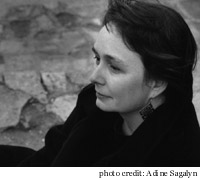 Ellen Hinsey’s collections of poetry include Update on the Descent (University of Notre Dame/Bloodaxe Books 2009), The White Fire of Time, and Cities of Memory. She has completed a prose memoir on Exile, The Encyclopedia of Exile. She edited and co-translated The Junction: Selected Poems of Tomas Venclova (Bloodaxe Books, 2008). Her translations of contemporary French literature and memoir are published with Riverhead/Penguin Books. She has received a Lannan Foundation Award and a Berlin Prize Fellowship from the American Academy in Berlin. She lives and teaches in Paris. (updated 7/2009)