Rows of writing students stared from my laptop into my Rhode Island apartment—a screenful of spring breakers trapped in an interminable vacation. It was March 2020, and the students had been told not to come back to campus lest they bring disease with them.

The class had read an essay I’d published about traveling in Europe after college. In the years following that trip, I’d referred to myself as a travel writer, but since returning home from India a week earlier, I couldn’t seem to find the story—whenever I tried to write, the page looked blanker than the faces of these long-distance learners as yet unaccustomed to online classes. So when their instructor had invited me to speak to her travel-writing class, feeling ill-equipped and uninspired, I’d almost said no.

From the third row of faces, a senior who’d chosen to be represented by a photo rather than video spoke. Her avatar grinned out from a coastal scene in which waves washed around large rocks rising from the shallows in the distance. The sea breeze had blown blonde strands across her face, giving her photo a carefree mien. From somewhere behind the image, the student voiced her question. She’d made plans to travel after graduation, but “now, due to the pandemic,” she said, sighing, “I can’t travel for months like you. If you’d graduated at a time like this, what would you have done?”

I recognized the question. When I took my six-month leave from daily life, it was 2009. The housing market had crashed, and my peers and I took personal offense; our potential—until that moment seemingly boundless—suddenly felt thwarted by forces beyond our control. By draining my meager savings, I pulled off that post-grad trip despite the recession.

The pandemic had barely begun, yet already these students had claimed it as their generation’s defining moment, just as those graduating in the wake of war or depression have found their expectations betrayed and plans cancelled by unlooked-for limits to freedom. The previous weekend, as I’d made my way home, I’d overheard many of their global cohort, in the gradually waning crowds in the Delhi, Paris, and Boston airports, complain of spring breaks being cut short.

I’d been tempted to judge those students in the airport for a lack of perspective. But two weeks earlier I’d feared the same restrictions. We were like the townsfolk of Oran, the French Algerian city in Albert Camus’s novel The Plague, who “thought that everything was possible for them.” Like them, we’d never “given a thought to anything like plague, which rules out any future, cancels journeys, silences the exchange of views.”

“They fancied themselves free,” Camus writes, “and no one will ever be free so long as there are pestilences.”

Sequestered in our homes, travel was no longer an option. Mobility meant weighing risks to ourselves and others, every venture complicated by consequence. Deprived of destinations, then, what would these travel-writing students write about? Even The New York Times was no longer printing a travel section. I stared at the screen, gathering my thoughts.

In The Plague, three writers are among those stuck in quarantine.

The journalist Raymond Rambert, only a few years older than the students on my screen, arrives to report on sanitary conditions for his Paris daily. When pestilence strikes Oran, Rambert languishes, pining for his absent love back home. As a foreigner, he believes himself to be above the rules and spends much of the book looking for a way out of lockdown. He does eventually put the welfare of others before his own, but neglects his journalistic calling to write what would likely have been the story of his lifetime.

Another character, Joseph Grand, works every night on a novel, obsessing over the rhythms of each word. Grand’s project draws a group of sanitary workers who find diversion in the image that his adjective-laden opening line evokes—a flower-strewn Champs-Élysées into which they might escape the plague-ridden present.

But Grand gets hung up on language, and the story doesn’t progress beyond its first sentence. In the throes of illness, he commands his doctor to burn the manuscript, and poetry perishes in the face of plague.

Then there is Jean Tarrou, an outsider whose notes, diaries, and interviews are used to tell the town’s story. While fact-based journalism is essential, especially in crisis, and novels see many of us through, Tarrou is the travel writer of this narrative. His notebooks contain a “minute description of the two bronze lions adorning the Municipal Office…[and] of the streetcar service in the town, the structure of the cars, their indeterminate color, their unvarying dirtiness.” He also “sprinkles his descriptions with bits of conversation overheard in streetcars.” Tarrou reflects the world around him; he’s able to do it because his compassion outweighs any selfish agenda.

This is, more or less, what I try to tell the students. We are still travelers, I assure the one whose vacation plans were cancelled. We are in a new world, in which what constitutes adventure might be a trip to the market; in which a doorstep delivery becomes heroic, and open sky is an exotic scene.

That morning I’d noticed my neighbor’s children for the first time, as they swung from bar to bar in the backyard. Overhead, the fluorescent green buds of a maple played backdrop to an oriole’s orange breast. I listened to siren after siren wail its way to the hospital, and to the silence of skies without airplanes. What if we started there? With our own bronze lions?

So much has changed, and so quickly, I say to the students, that even if the same four walls day after day feel like monotony, there is always something new to describe, an opportunity to slow down and write this new world. What you make of these moments, how you choose to wield your freedom, will be the story. 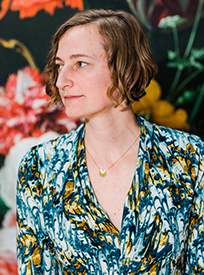 Jodie Noel Vinson is a writer and editor based in Providence, Rhode Island. Her essays and reviews have been published in The New York Times, Harvard Review, AGNI, Literary Hub, Ploughshares, Creative Nonfiction, Electric Literature, The Rumpus, The Los Angeles Review of Books, and elsewhere. More info at jodienoelvinson.com. (updated 4/2021)