It was a while ago, I tell you, that I slept in that Catholic room in an iron bed. It was a Franciscan friary that had space for artists, but many monks had been sent there to die. One, my favorite—big-bodied and ebullient (though silent, they were all silent)—was in a wheelchair within days. I remember there were tree frogs, meek, moist things clinging to the branches that rubbed my window, too small for such decibels, noises from tiny throats. I had just finished up my PhD exams and this was my reward, to write.

Lost in the rolling Midwestern countryside, the buildings were worn but clean. Because of the time of year, not summer and not yet fall, I was alone in the artists’ quarters. A woman from town brought me food from a list I left in a mailbox on weekdays or I ate in silence with the dying. I remember one meal of burnt pork chops and canned beans—this was my companionship. The tables of the brown-robed chewed slowly, speech being the only reason to move food quickly through mouths, it seemed. I had won a contest, one named for a nun who loved literature, and this was my prize. All night the screeching of the frogs—they wanted something, surely, crying all night? A cacophony of desires.

And all day, time stuffed the room with its patience and I wrote poems about a kind of sourceless suffering. I could have dulled this with the medications doctors had prescribed, but I refused comfort, while time could tell me about nothing except itself. I made myself write every day, though I could not bring myself to look at those notebooks for nearly a decade. Often I wept and took long baths.

Later, I signed up for a free service on the web. A programmer provided a square box on his website and in that box, you were supposed to write your worst fears, such as I am a fraud and everyone will know. That evil colleague is going to dismantle me for reasons of greed. My child will know how empty my heart is. I cannot be any kinder than I am right now and this makes me strange and not deserving of peace or joy. I had heard about the website on the radio when the inventor decided that our worst thoughts become boring with enough repetition. I hit enter.

At the friary, I went for long runs in what seemed to be a forest, of a sort.

I did not know the names of the trees or flowers in that part of the world, but it was September, anyway, all starting to wither and fall. I came out on a road one time, a farming road, rutted and weed-strewn. The sudden light and openness was a shock after so much thrashing through the undergrowth. Another run, I found a one-eyed dog I named Jasmine in spite of her scars and ugliness, and gave her the last of my sandwiches. I felt afraid every day (of what?) and the coward I was became my most constant friend. I read Calvino’s Invisible Cities over and over, a book composed of a conversation between Marco Polo and Kublai Khan, who did not speak the same language. Polo tells of impossible worlds from his travels and then he and Khan discuss things to learn from those made up worlds.

The web service still provides for me, daily as prayer. The program mixes and remixes my own original awful fears with scraps from other people’s boxes. Emails are delivered, random and acute: I knew you would fuck things up, or, You are destined to be lonely forever. Only sometimes do I open them. They shock me first then soothe me. There it is, I say to myself. So what?

The poems I wrote at the monastery were not good and meant nothing to others. The language I had for my own suffering was ultimately incommunicative. It mystifies me when I read it now. The big, silently raucous monk died one night—I didn’t expect he would go so quickly, or maybe it was denial, that I didn’t want to be in the position of missing someone I did not know at all, but whose body I felt I loved. The coroner’s van slid down the leafy drive to collect that body and one monk, the youngest, emerged to speak. I watched his hands and mouth move from my little bedroom window.

I continued to run in the forest, never seeing Jasmine again. After the death, I found a circular path where the monks, probably—I could not ask them—had once set statuary depicting the Stations of the Cross, life-sized, now overrun with brambles. Though I was frightened when first I stumbled upon them, I often studied their faded, blurry faces and I came to love the minor figures best. I pulled the ivy off Simon of Cyrene who strained the cross back onto Christ’s shoulders. Veronica wiping Christ’s blood and sweat with her veil and her sorrowful mouth, I held her broken hands. I touched the backs of two crouching soldiers with their dice, who had just stripped Jesus of all he had left. 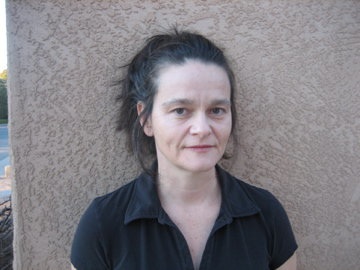 Connie Voisine is the author of Rare High Meadow of Which I Might Dream, which was a finalist for the 2009 Los Angeles Times Book Award. She is currently a Fulbright Fellow in the School of English at Queen’s University in Belfast, Northern Ireland. (updated 4/2012)