As it appears in AGNI 82, my poem “Real Estate,” written during my first year at the Iowa Writers’ Workshop (1988-89), is a vaguely Whitmanic lyric. In it, a somewhat portentous speaker promises openness and sharing to someone who’s about to cohabitate with him. It is like the blessing offered at the beginning of a journey, a kind of christening, if only of a bathtub boat. It seems imperfect to me. I tinkered with it on and off over the years, trying to make it wiser or more elaborate but what AGNI kindly published was the version I originally submitted to class, authentic enough somehow to resist all of my attempts to change it.

Its companion piece, “Rotation,” was finished for publication last year. I consider it a reasonably successful example of my recent work. It focuses on a terrible accident and a gruesome death in the context of two people in a relationship, two brothers. It contains no promises. No largesse is on show. It has been stripped down as if by the whirling propeller blade it describes.

Poetry is a member of the fictive arts but I do have a brother who taught me the basics of “Rotation”—the mesmerizing way in which the antecedents of a death came together. In all but the last and final drafts the dangerous brother, the preferer of perfect illusions, was the speaker.

I like to look at the two works together, twenty-five years and a completely changed attitude between them. “Real Estate” airily invites closeness; “Rotation” knows closeness as death. Each is a negative image of the other.

Oddly, these pieces are also negatives of the states of mind that produced them.

Despite its collegiality, the author of “Real Estate” was about to withdraw from everyday sharing/caring relationships. Less superficially sociable, the writer of “Rotation” is, he believes, more engaged with people and fun to be around; his relationship with his brother, in particular, has never been better.

I believe this second, hidden, inverse similarity implicates the idea of art as a kind of counterweight to existence/experience, at least as far as the artist is concerned. But what can that innate/unconscious balancing along a central life continuum mean to a reader? 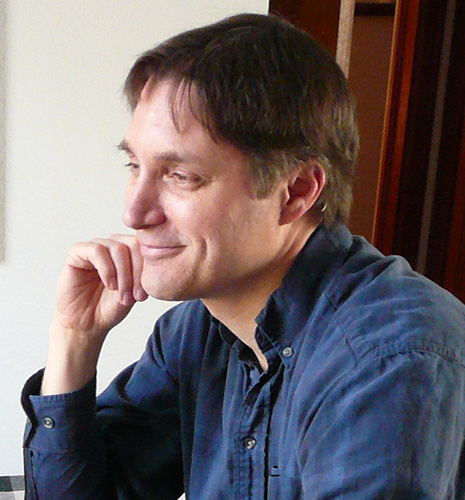 Dore Kiesselbach studied creative writing at Oberlin College and the Iowa Writers’ Workshop, then practiced housing law in New York City for several years before refocusing on poetry post-9/11. He is the author of two poetry collections: Albatross (University of Pittsburgh Press, 2017) and Salt Pier (Pittsburgh, 2012), which received the Agnes Lynch Starrett Prize and contains work awarded the Robert H. Winner Memorial Award from the Poetry Society of America and Britain’s Bridport Prize in poetry. His writing has recently appeared or is forthcoming in Boston Review, Pleiades, Plume, Stand, AGNI, and elsewhere. He lives in Minneapolis. (updated 10/2017)