How strange that someone can be an authority on a life other than their own. And how odd that in setting themselves aside—to better imagine another, objectively—a biographer often ends up producing a sort of veiled autobiography. Yet, perhaps self is not meant to be sacrificed entirely, in the art of biography, only long enough to return as Other. In many ways, biography comes down to a question of temperament, a borderless affinity stretched across time and space. Something of a spiritual kinship must exist in order to be able to channel another’s spirit. This is the mysticism of the biographer: one who knows without knowing, whose “facts” unearthed during the hard work of research only go on to confirm initial intimations. (And the work itself is a labor of love, or perhaps an exploration of unlived possibilities).

“Every writer is a man given over to an obsession,” writes Graham Greene. The biographer is no exception. The act of biography is a kind of possession and exorcism. The biographer who dedicates years of their life, sometimes decades, to explore another’s must also experience all sorts of intensities, initiation rites, and illuminations. Somewhere along the way, a life is transformed into a work of art. How much can actually be known for certain of another person cannot be said. Yet in the hands of an inspired biographer a figure may emerge from the mist, summoned from the dead, and made to walk and talk among the living. In this sense, a biographer must be seen as a creative artist in their own right. Whereas “nothing alive can be calculated,” as Kafka tell us, it can be approximated.

In The Artist as Mystic, a collection of ecstatic conversations I had with author and editor Alex Stein, we attempted something of this literary séance, daring to summon the spirits of Nietzsche, Rilke, Kafka, Kierkegaard, Baudelaire, and others. In Stein, I’d found a serious playmate who had read and lived with many of these same poets and thinkers that had shaped my intellectual landscape, and decades later we were both ready to unburden ourselves of their influence, while acknowledging our debt. We did not have a name for this odd genre-bending form that we embarked on—I think we settled on lyrical interviews—but we did have a theme. Broadly speaking, we were sifting through the (sometimes dark) inheritance of these writers for the Light: the prophet in Nietzsche, the God-seeker in Kafka, the secret ascetic in Baudelaire. Always, we groped for the gold thread of the artist as mystic—high above their small, tortured self—as makers of beautiful things, seeking to harness that beauty to their great longing, in their life-long pursuit of transformation.

In the process, the lines often blurred between Stein’s utterances and mine, or even the specificity of the artists under consideration. What remained was an inhabited intensity that each of our illustrious subjects vibrated with when we attempted to speak them from the inside out. In this joint attempt at creative biography writing, we found we were also sounding our own truths, more freely, by donning masks of our great dead friends. Sometimes in writing poetry, for example, it is necessary to become the poem—one agonizing line, or liberating verse, at a time. Something of this living-through was also required of us in attempting to translate the inner lives of our literary masters. Modern American poet Gregory Pardlo, in his extraordinary essay “Choosing a Twin,” echoes this truth while discussing a different discipline: “Translation is a practice of empathy,” he writes, “like choosing a twin, where affinity and kinship is a declarative act and not a passive discovery.” 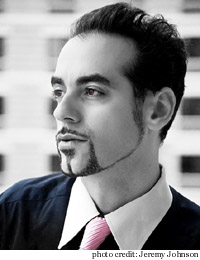 Yahia Lababidi began writing aphorisms as a teenager in Egypt more than twenty years ago. Today, Lababidi is an internationally published aphorist, poet, and essayist, with work appearing in such publications asÂ World Literature Today, Cimarron Review, AGNI, Rain Taxi, and Philosophy Now. He is the author of two collections of aphorisms, Where Epics Fail (Unbound, forthcoming 2017), featured on PBS NewsHour, and Signposts to Elsewhere (Jane Street Press, 2008), selected as a Book of the Year by The Independent (U.K.); three poetry collections, Balancing Acts: New & Selected Poems (1993â€“2015) (Press 53), Barely There (Wipf and Stock Publishers), and Fever Dreams (Crisis Chronicles Press); and an essay collection, Trial by Ink: From Nietzsche to Belly Dancing. Another of his projects is a series of ecstatic literary dialogues in collaboration with Alex Stein, The Artist as Mystic: Conversations with Yahia Lababidi. Lababidi’s work has appeared in several anthologies, including the bestselling Literature: An Introduction to Reading and Writing and Geary’s Guide to the World’s Great Aphorists. His writing has been translated into Arabic, Slovak, Dutch, Swedish, Turkish, Spanish, Hebrew, German, and Italian, and he was chosen as a juror for the 2012 Neustadt Prize for International Literature. Lababidi is included in the first anthology of contemporary American aphorists, Short Flights: Thirty-Two Modern Writers Share Aphorisms of Insight, Inspiration, and Wit (Schaffner Press). (updated 2/2016)

Read Alex Stein‘s “The Prayer of Attention: A Conversation with Yahia Lababidi,” an AGNI Online interview excerpted in Harper’s Magazine’s “Links” for April 21, 2010.

A second interview appears in AGNI 74, Alex Stein‘s “The Exquisites: A Conversation with Yahia Lababidi.”