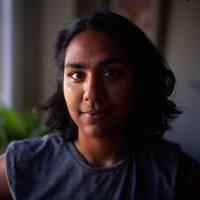 Shruti Swamy’s work has been published in Black Warrior Review, New American Writing, PANK, and elsewhere. She has been awarded residencies at the Millay Colony for the Arts and Hedgebrook, and in 2012 was named Vassar College’s fiftieth W. K. Rose Fellow in Creative Arts. She lives in San Francisco’s Tenderloin, where she is at work on a novel. (updated 4/2015)