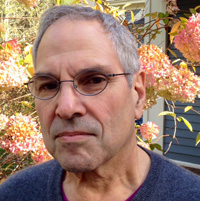 Richard D’Abate is the author of the poetry collection To Keep the House From Falling In (Ithaca House Press, 1973). His stories and poems have appeared in Epoch, Apple, AGNI, Presumpscot, and elsewhere. A former executive director of the Maine Historical Society, his essays on the legacy of European exploration have appeared in various collections, including American Beginnings (University of Nebraska Press, 1993). He lives in Wells, Maine. (updated 10/2017)