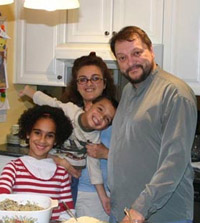 Nicholas Samaras is from Patmos, Greece and Woburn, Massachusetts. His new book is American Psalm, World Psalm (Ashland Poetry Press, 2014). His first book, Hands of the Saddlemaker (Yale University Press, 1992), won the Yale Younger Poets prize. He had also been award fellowships from the National Endowment for the Arts and the Lilly Endowment. The poems in this issue are from his new manuscript SIMKO, based on the life of Slovakian poet and translator Svetozar Daniel Simko. Currently, he is completing a memoir of a childhood lived underground and on the move. Samaras lives in West Nyack, New York. (updated 5/2015)