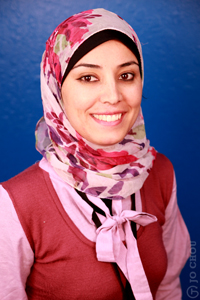 Najlaa Attallah was born in 1987 and is a Palestinian writer based in Gaza. She obtained a BA in Architectural Engineering from the Islamic University in Gaza in 2010 and is currently writing a Masters thesis in Engineering Project Management at the same university. While still in secondary education, she won numerous prizes for her writing, including an award for Best Play from the Holest Culture Centre. She published her first novel, I Loved Her So, at the age of fifteen, and her second novel, A Cup of Coffee, was published by the Palestinian Ministry of Media. Her Young Adult novel The Photo was listed as one of the best 100 books in the Arab world in 2009. Her debut short story collection, Croke (2012) was the winner of the Najati Sidqi Competition in Ramallah, presented by the Palestinian Minister of Culture. In 2013 she participated in a short story festival in Morocco, representing Palestine. Her short story “The Whore of Gaza” features in English translation in The Book of Gaza, edited by Atef Abu Saif (Comma Press, 2014).