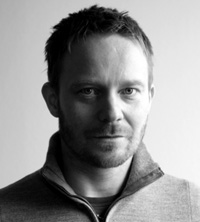 F. J. Riopelle is the author of two works of fiction in Norwegian , Gutten som sa nei og andre noveller (The Boy Who Said No and Other Stories, 2007) and Lykkesmeden (The Happiness Smith, 2009). He is a literary critic for the Norwegian daily newspaper Klassekampen. A pacifist and conscientious objector, he has been sentenced to prison twice. He is presently working on a planned tetralogy of novels about life in America. He lives in Boston with his American wife and infant son and teaches Norwegian at Harvard University. (updated 5/2013)

Essays
Norway and the Prisoners of Peace
by F. J. Riopelle
Essays
Online 2012
Back to top