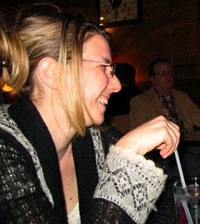 Emily Stone published her first “literary” piece here at AGNI Online in 2008, and her work has since appeared in Tin House, Fourth Genre, and The North American Review, and been included among the notable entries in The Best American Essays and The Best American Travel Writing. She teaches expository writing at NYU and maintains the website Chocolate in Context. Her other writing has appeared in magazines such as Travel + Leisure, Budget Travel, and Time Out New York, as well as various websites, including World Hum, Epicurious, and Culinate. (updated 1/2017)