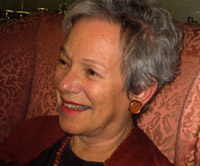 Edith Pearlman (1936–2023) became recognized as one of the premier short story writers of her time. Her final collection, Honeydew (Little, Brown, 2014), was longlisted for the National Book Award. Her new and selected, Binocular Vision (Lookout Books, 2011), won the National Book Critics Circle Award and was a finalist for the National Book Award. She published three earlier collections—How To Fall (2005), Love Among The Greats (2002), and Vaquita (1996)—and her stories were featured in The Best American Short Stories, AGNI, The O. Henry Prize Stories, New Stories from the South, and the Pushcart Prize anthology. Winner of the PEN/Malamud award for excellence in short fiction, she lived in Brookline, Massachusetts, and was an important support for writers and others across the Boston area through her volunteer work.