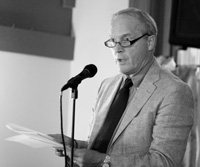 David Huddle will hold the 2012–13 Roy Acuff Chair of Excellence in the Creative Arts at Austin Peay State University. His third novel, Nothing Can Make Me Do This, appeared from Tupelo Press last year, and his seventh poetry collection, Black Snake at the Family Reunion, appears this fall from Louisiana State University Press. Another novel, The Faulkes Chronicle, is forthcoming in 2014 from Tupelo. His work has appeared in The New Yorker, AGNI, Esquire, Story, The Best American Short Stories, and elsewhere. His sixth collection of poems and most recent book, Glory River, was published by Louisiana State University Press in 2008. (updated 10/2012)