Shut in like this, I find a need to reshuffle the books I haven’t read but _might—_some purchased a few weeks ago, others a couple of decades ago. This was how I came across my unread copy of Czeslaw Milosz’s The Land of Ulro, which the Polish Nobel laureate signed for me at Amherst College on March 28, 2000. The coincidence of the date, coupled with the drawn-out, depthless way we moved through that very month in which I sat down to write this, meant that the reverie tossed me like a foil muffin wrapper rushing along a gutter toward a storm drain. I remembered everything about that earlier March day, or rather everything still in me to be remembered: I think I saw a man die.

I don’t want to start there. Everyone dies, and people die all the time, as one especially abject political party has been saying, truthfully and yet dishonestly. But for me that long-ago March death, like all others, is approachable only through the circumstances that form my tenuous link to it.

I was very happy to be there to see Milosz—and some of the reasons warrant a little unpacking.

I wasn’t an Amherst College student. I minored in Amherst College: that’s my canned line about my time at that small school across town from the much larger school I actually attended: UMass Amherst. One of the shticks of the Five Colleges in the Pioneer Valley is that if you attend any one of them, you can take classes at all five. But the reality, at least in my time, proved less inspiring. Most of us never got around to it. There were practical difficulties—buses, schedules.

In spite of this, I fixated on the idea of the Five Colleges, and wound up taking one course each at Smith, Mount Holyoke, and Hampshire, and, all in all, five courses at Amherst College. Why? To make school new again, maybe? To start over and over—rather than doing the harder work of just going on? The novelty of swooping into each cloistered little world never wore off. I enjoyed feeling like an interloper, and wish I’d done more interloping. Sometimes I did feel an odd, off moment: something like Class wearing the mask of hierarchical, collegiate Caste. Mostly, though, I felt welcome.

And I wasn’t a student in that poetry seminar at all. I was studying with a visiting English poet and he’d cherry-picked a few of us from upper-level workshops to deepen the bench in the intro class where Milosz would be appearing.

At office hours, a few days before, the English poet had been fulminating about a wrinkle in bringing Milosz to Amherst. Months ago, he’d reserved a room at the murderously named The Lord Jeffrey Inn, owned by the college. Now the college had nudged the Milosz reservation to the curb. Every room was needed for an Amherst College alumni event.

My teacher poet, incredulous, noted that Milosz had not only won the Nobel Prize in Literature but had also had a hand in bringing down Communist rule in Poland. My teacher poet asked me, given that resume, what it was, exactly, that you, me, or anyone had to do to outrank an Amherst College alumnus at Amherst College?

I’ve come to think of that as a profound question of broad and ongoing application.

On the morning of the reading, I borrowed my girlfriend’s car and drove out of Northampton, up Route 5. To get a hardback suitable for Milosz’s signature, I headed toward Troubadour Books, one of the great shops, the creation of Bob Willig. When he later began to lose his sight, you’d bring your selections to the counter and Bob would ask you to read out the prices to him. He passed away last year. In 2010, Troubadour would join up with Grey Matter Books and relocate to Hadley, Massachusetts, to be housed in an old tobacco processing plant. Grey Matter is still there, and is, give or take, the best used bookstore I know. Better than that one, the one you’re thinking about right now.

As I was approaching Hatfield, the old-style cargo van in front of me drifted. There was no veering or jerking, it simply began to track a line different from the line the road followed. There was a man in the driver’s seat; all I could see was that he was upright.

Without slowing down, the van left the road, crossed the shoulder, and, like a cartoon rabbit, bounded along the uneven ground. The last leap brought its nose a good three feet in the air, which was about how high the bumper reached when it struck a wooden power pole and sheared it clean away. I rolled to a stop and stared.

The pole was held up by wires going off in three directions. Broken, it did not immediately fall to the ground: its length stayed high, like a projectile in a slingshot, and slipped around and along the side of the van with a violent grace. The van itself stopped dead and rested, propped, almost halfway along its length, on the stump.

In this long moment, the pole had to return to Earth. The three wires kept it upright as the broken end slammed to the ground with a force I can still feel in my teeth. Upon impact, a transformer at the top of the pole exploded, and the view through my windshield went white: all I could see was white light, white of a totality I’ve never seen again.

I was slow to react, mesmerized by the disaster. Now I reversed and backed out from under fallen wires. By the time I collected myself and opened the car door, people from a roadside office were standing beside the van. One of them had worked as a lineman, and quickly determined the wires were dead, so they went in.  The driver was an old man, maybe ten years older than I am now. The crowd handed him down—limp, but not unconscious—from one person to another, from van to grass.

And I don’t know if he lived or not. I gave my statement to the police, but if the local paper wrote it up, I never saw. Usually I think he didn’t survive, but the lack of easy Internet became a reason not to find out that’s hard to still account for today.

Because of the accident, the actual sit-down with Milosz is as vague to me as the accident is vivid. I have no quarrel with poetry’s claims on the real, or vice-versa, but I was in neither place just then—so anything Milosz brought to the room has slipped away. I asked a question about Robinson Jeffers; I remember he answered with something acute, but even at the time I recognized it as something he’d already written into an essay.

Professionalism creeps into every profession, and most vocations, too.

A few months later, I moved with my wife to Texas, so that she could go to graduate school. I worked for and was eventually mass-laid-off from a dot.com that (mostly) went bust during the dot.com bust—I still have an Austin Lyric Opera poster of a production of Faust underwritten by Enron—and graduated (finally) from college, passing Latin by something we will call grace.

My grandfather died. My grandmother died. The year 2000 ended and the year 2001 began, and the twentieth century gathered up her skirts in greater haste than I ever counted on and which surprises me still. Through no merit of my own, I continued to become less the person I was then, more the person I am now.

I started reading The Land of Ulro a few days ago—it’s not bad. 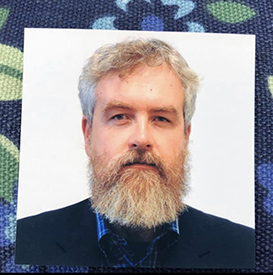 Drew Johnson’s fiction has appeared in Harper’s, VQR, New England Review, The Literary Review, and elsewhere. Other writing has appeared at Guernica, Literary Hub, The Los Angeles Review of Books, and The Paris Review Daily. The Cupboard brought out his “7 Greyhounds” as one of its single-issue chapbooks. Much of this can be found at walkswithmoose.com. (updated 5/2020)