This is not about God.

We, who want to be loved. Famous. Infamous. I who whisper sometimes, just let the words be good enough. Do I really mean good enough for something or someone—too good to name? When I’m honest, I think I do.

One evening, it is told—a thief visited Ry__ōkan’s hut at the base of the mountain only to discover there was nothing to steal. Ry__ōkan returned and caught him. “You have come a long way to visit me,” he told the prowler, “and you should not return empty-handed. Please take my clothes as a gift.” The thief was bewildered. He took the clothes and slunk away. Ry__ōkan sat naked, watching the moon. “Poor fellow,” he mused, “I wish I could have given him this beautiful moon.” This story may be an interpretation of an account mentioned by Ryōkan in a haiku:

The thief left it behind:
the moon
at my window.

Me: I was scraping my knee on the edges of aging and doing it well and not doing it well. Being a voice in my time. Being loud enough. Soft enough. Committed enough. Scraping my hands and nails on fame and prizes and doing some and a lot and then nothing more about each, because what could I do about any of those, really? I don’t like people who always want to be rock stars. They are offensive. Or those who take selfies while listening to beautiful music. I heard of a Nobel winner who told everyone when he was growing up that he was going to win that prize. Self knowledge? or aggrandizement? Was he worthy? Yes—I’d read the books.

Me: facing the soul growing, and afraid to. That takes so much time.

And then I met a famous woman I know. She said she’d been planning her last performance, it might be time. Her husband wanted southern hymns, white flowers. She, a eulogy to be admired, the actress, the mother, the wife, the hostess, mentor, artist, healer, lover, until she knew this instead: all she wanted was to learn a little humility before it was too late. To come to God and not as a stranger, to wait in a wilderness and wait in a garden, needless—and to be listening.

As I become less, she said, God can become more, she said, she wanted—she said, to say she honored God with her substance, was a faithful steward of the bounty. A eulogy can be a graven image, she said, and I would like not to need one, she said. But that would require humility, she said.

No longer scraping my knees I was on them, more than awkwardly, hands only open in thank you, thank you to who names all the sharp stones on the path to break my spiritual neck on. Thank you for the whisper to find my self who can rest in a garden of humility and to know how hard I’ve curried favor all my days, my need and need and need for recognition all my days, for what I’ve been as talent, poet, beauty, woman. A woman. A human. A poet. To find the aging woman lovely, result of all I’ve lived and smiled and wept and needed and tried. I heard the actress once more speaking for a God I know or don’t: I will take you into the desert and there I will speak to you in the depths of your heart.

On my knees, hands so open, I whispered yes. In my soul, eyes open, I remembered when white gingers, yes, have bloomed in an island’s rising suns. A prize. When again and again my friends on my paths have told me: just love. And that is all, and that is all, and that is enough. The touch of the sun, the breath of winds, caress of waters, warmth of fire, smile of rains, the hug of spirit. When a friend told me that.

I aged again this week. Better than before. Again. What words can hold that?

Nina in Chekhov’s Sea Gull says: I’ve learned what matters in our work now, for an actress or a writer, and it’s not fame or the things I used to dream about—it’s being able to endure. It’s knowing how to bear your cross and keep the faith. You see, I do have faith now, and my life isn’t so painful. I’m not afraid any more.

And Nina (I looked up the name)—means grace.

Be yourself, whispers Oscar Wilde, one of my occasionally nasty and but always on point interlocutors. Everyone else is already taken.

What the actress told me: It’s shine, darling. It’s all shine. 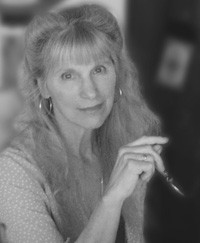 Margo Berdeshevsky, born in New York City, lives and writes in Paris. Her latest poetry collection, Before The Drought (Glass Lyre Press, 2017) was a finalist for the National Poetry Series. A new collection, It Is Still Beautiful to Hear the Heart Beat, is forthcoming from Salmon Poetry. Kneel Said the Night (a hybrid book in half-notes) is forthcoming from Sundress Publications. Berdeshevsky is the author, as well, of the collections Between Soul & Stone and But a Passage in Wilderness (both Sheep Meadow Press). Her book of illustrated stories, Beautiful Soon Enough, received Fiction Collective Two’s Ronald Sukenick/American Book Review Innovative Fiction Award. (The book included the AGNI stories “Pas de Deux, à  Trois,” “A Troika for Lovers,” and “A Friday Desdemona.”) She has also received the Robert H. Winner Award from the Poetry Society of America. In the United States, her work has appeared in Poetry International, New Letters, The Night Heron Barks, Kenyon Review, Plume, The Collagist, Tupelo Quarterly, Gulf Coast, Southern Humanities Review, Pleiades, Prairie Schooner, The American Journal of Poetry, Jacar—One, Mānoa, Pirene’s Fountain, Big Other, Dark Matter: Women Witnessing, and elsewhere. In Europe and the U.K., her work has appeared in The Poetry Review, PN Review, The Wolf, Europe, Siècle 21, Confluences Poétiques, Recours au Poème, Levure Littéraire, and Under the Radar. Her “Letters from Paris” have appeared for many years in Poetry International online. For more information, visit here. (updated 3/2022)