I am a digital hoarder. In my translation work, this tendency manifests in the way I keep all my drafts—every last one, even those that now make me wince. For every document containing a piece I’ve translated, there is a corresponding document labeled “cut” that contains all my sentence scraps. Sometimes “cut” turns into a scratch pad where I rapid-fire type all the translation options that come to mind, just to see where the whir lands me. At the level of the document, I don’t delete old versions—instead, “Botoxdiplomatique.docx” becomes “Botoxdiplomatique v.2.docx,” “v.2.1,” “v.2.2.1,” and so forth until, in this case, it reached “Botoxdiplomatique v.4.1,” the version of Peruvian writer Julia Wong Kcomt’s poem that was published in AGNI 94. Older v’s are tucked into folders labeled “Archived,” but never trashed.

This habit slows me down, and rarely comes in handy—I can’t remember the last time I dug into a “cut” document or an archive folder for inspiration. On the other hand, sometimes I will publish a translation, only to revisit it and keep “versioning,” to borrow Johannes Göransson’s word. This happened recently with “The Red Rooster,” my translation of Julia’s poem “El gallo rojo” from the 2009 collection Bi-rey-nato.

I just now dug into the “Archived” folder for Bi-rey-nato and found that the first version of “The Red Rooster” was created on February 26, 2020. That day I probably sat at the dining table I used as a workspace in my rented Lima apartment, opened a new Word document, and laid printouts of Bi-rey-nato on a bookstand to the left of my computer. My first time being bowled over by Julia’s poems had come a couple of years earlier, while I was still an MFA student in the University of Iowa’s literary-translation program. Three weeks after I saved my first draft of “The Red Rooster,” Julia came over for dinner—I made congee topped with too-thick matchsticks of ginger—just hours before President Martín Vizcarra announced a country-wide lockdown in response to the growing pandemic. I was in Lima on a Fulbright fellowship to learn about the tusán, or Chinese Peruvian, community and to meet and work in person with Julia, the tusán writer whose work I’d fallen in love with. That evening, before everything shifted, Julia said the congee I’d made reminded me of her father’s cooking, and I beamed.

In September 2020, “The Red Rooster” was published in an issue I guest-edited of Words Without Borders. In that version, the last line is “The rooster’s crow will return when the stone flies.” In pre-publication versions of “The Red Rooster,” the last line was for a long time rendered as “The rooster’s crow will return when the stone wings away.” The final line of the Spanish—“El canto del gallo volverá cuando vuele la piedra”—is much more direct than the rather tortured formulation “the stone wings away,” but I had played with “wings away” because in the stone (“piedra”) that flies (“vuele”), I read an allusion to José Watanabe’s poem “La piedra alada” (“The winged stone”), and I wanted English-language readers to see what I saw. But then I realized that although “wings away” might be a more direct link to “alada,” or “winged,” readers unfamiliar with Watanabe’s oeuvre wouldn’t catch the allusion no matter how loud I made it. The self-consciousness of “wings away,” the way it announced its presence with a thud, no longer felt worth it—so I axed “wings away” in favor of “flies,” and off to the archive went the winged stone.

A few months later, while preparing more poems for Bi-rey-nato’s publication as a bilingual chapbook, I returned to my published version of “The Red Rooster” and was horrified. How had I not realized that in choosing to translate “canto” as “crow” (in the sense of “cock-a-doodle-doo”), I’d inadvertently introduced a second species of bird into the sentence, muddying the clarity of this crucial last line? And why hadn’t I realized that this version of the line—“will return” in particular—cleaved too closely to the syntax and dictionary definitions of the Spanish? Julia’s striking, rhythmic line, replete with assonance and a lovely echoing of c’s and v’s, fell flat in the version I’d put out into the world.

I make no promises that it won’t change again.

In my file directories, under “Archived,” sits “Comments,” a folder containing notes from the originating authors and my trusted readers. Sometimes, the contents of these folders catch me out in a half-truth. As I remembered it, I hadn’t noticed that “rooster’s crow” could refer to two bird species. But revisiting a friend’s early comments, I see they noted this very issue: “‘rooster’s crow’ brings up the image of a crow (bird) and takes me out.”

I was explicitly told—and for whatever reason, moved past that Word comment without addressing it. My friend and I spoke over the phone as I agonized over eleventh-hour tweaks—they are a very generous friend—and it’s possible that in the course of our conversation we arrived at an understanding about “rooster’s crow” that prompted me to keep the line as it was. My memory is fallible. Finally, a benefit to obsessive draft-storing: those v’s with collaborators’ initials remind me of the work other hands have done on these translations I call “mine.” Here is proof that my “original” thought about crow wasn’t mine at all.

In the opening essay of his collection Transgressive Circulation, Johannes Göransson examines and disassembles the well-worn notion that poetry is somehow untranslatable. He writes, “The threat of translation is the threat of excess: too many versions of too many texts by too many authors from too many lineages. Poetry becomes too volatile in translation’s excess.” He notes that poetry translation disrupts, for the reader, the assurance of “mastery.” Mastery: that vexed concept that haunts so many disciplines on the cusp of or already undergoing a sea change, including literary translation.

Dear reader who has perchance stumbled across “my” translations: I revel in linguistic excess. Give me the sesquipedalian, the tetralingual code-switching (one of many reasons I am so drawn to Julia’s work), the branching clauses hanging by an em dash, the iterating Word files of a digital hoarder. My translations are unstable—and that seems just fine to me, because as Karen Emmerich shows in her 2017 Literary Translation and the Making of Originals, the texts that we call “originals” are also unstable. Forget “replication.” Translators, Emmerich writes, “are in the business of . . . textual proliferation.” 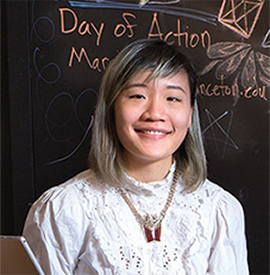 Jennifer Shyue is a translator focused on contemporary Cuban and Asian-Peruvian writers. Her work has been supported by fellowships from Cornell University’s Institute for Comparative Modernities and the Fulbright Program, and has appeared in New England Review, AGNI, Words Without Borders, the Action Books blog, and elsewhere. Her translation of Vice-royal-ties by Julia Wong Kcomt is forthcoming later this year in Ugly Duckling Presse’s Señal chapbook series. (updated 10/2021)